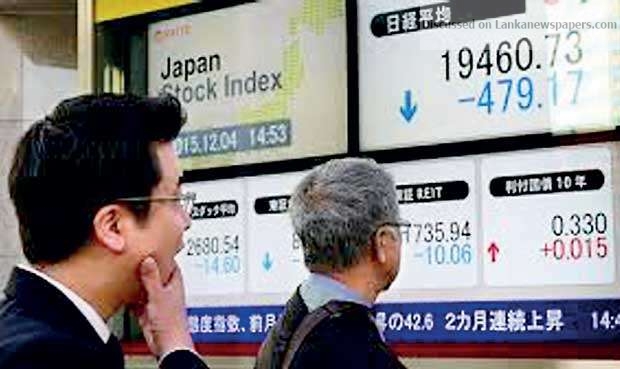 HONG KONG (AFP) – Fresh political turbulence in Washington and renewed fears over US-China relations pushed Asian markets lower yesterday, as a global slump sparked by unease over Fed policy showed no signs of easing.
The resignation of US Defense Secretary Jim Mattis seen as a moderating force on an often impulsive president and the looming threat of a federal government shutdown alarmed investors as concern grows over weakening global growth.
US stocks endured a torrid session, the latest losses in a bruising December that has set up Wall Street for its worst year since the 2007 financial crisis, with the Nasdaq now almost 20 percent off its 2018 peak.
Shares turned sharply lower after President Donald Trump hardened his demand Congress fund a US-Mexico border wall, plunging Washington into chaos and leaving the US government on the verge of a Christmas shutdown with less than 24 hours before a midnight Friday deadline to reach agreement.
Rising tensions between the world’s two largest economies also unnerved markets, with China hitting back at the US after the Justice Department indicted two alleged Chinese hackers accused of having ties to Beijing’s security services.
US officials said the indictment showed President Xi Jinping had not fulfilled his pledge to stop cybercrime, but it drew a furious response from Beijing, which accused Washington of “fabricating facts”.
The row erupted as the two sides prepare for talks next month to resolve their trade conflict. “A potential US government shutdown and US accusations of Chinese hacking fuelled existing market concerns about economic growth,” said Michael McCarthy, chief market strategist at CMC Markets and Stockbroking. Crude added to anxiety on financial markets, with both WTI and Brent paring gains earlier yesterday.
Analysts said OPEC moves to cut production would likely have little effect.
“There’s nothing OPEC can do about that predicament,” Sam Margolin, a Wolfe Research LLC analyst, said.
“The solution lies only in market confidence around global growth, the US-China trade war, and the pace of Fed rate hikes.”
Japanese stocks again bore the brunt of Asian losses yesterday, with the Nikkei falling further into bear market territory to hit a fresh 15-month low and regional shares on course for the worst week since October.
Nissan slipped 2.04 percent after its former chairman Carlos Ghosn faced a fresh criminal allegation that could keep him in jail well into 2019.
Shanghai retreated 0.8 percent, capping a difficult year for Chinese equities, with nearly $3 trillion wiped off the value of the country’s stock market since the end of January.

Sydney also lost ground while Hong Kong recovered earlier losses to chalk up a 0.5 percent gain.
The greenback struggled as investors shunned risk, wallowing near the 111-yen mark and adding to downward pressure on the Nikkei.
“The dollar is expected to continue facing downside pressure against major currencies,” said Minori Uchida, head of Tokyo global markets research at MUFG Bank.
Currency traders had a case of “irritable Powell syndrome”, quipped Stephen Innes, head of Asia-Pacific trade at OANDA, after Fed chairman Jerome Powell unnerved equities and the US dollar Wednesday when he said the bank would not change course on reducing its balance sheet.
Markets sank across the world even as the Fed predicted two interest rate increases next year down from three with the bank trimming its forecast for US growth and inflation.
“The risks are that this weakness that we’re seeing will continue into next year,” Shane Oliver, head of investment strategy at AMP Capital Investors, told Bloomberg TV.
“The Fed should come out and say, if need be, we can adjust the rate at which we undertake quantitative tightening. That would go a long way to help settle markets.”
US Treasury Secretary Steven Mnuchin said Wall Street’s response to the Fed’s move went too far but European equities also closed lower Thursday.
Eurozone stock markets fell further at the open yesterday with Frankfurt and Paris down 0.4 percent, while London was flat.