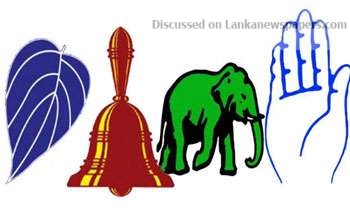 Discussions are underway among political parties to approve a resolution in Parliament with two-thirds majority calling for its dissolution in case the Supreme Court holds that the dissolution violated the Constitution.

The government which took office on October 26 is considering the possibility of relinquishing office in the event the Supreme Court rules that the dissolution of Parliament by President Maithripala Sirisena is invalid.

Negotiations are underway among several political parties to submit a resolution in Parliament calling for a general election.

President Maithripala Sirisena and Speaker Karu Jayasuriya are known to held talks both formally and informally on how best to end the present stalemate. Some UPFA MPs have requested the President to declare a referendum to seek public opinion on holding a general election.