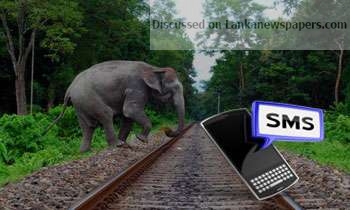 The Department of Railways today introduced an SMS hotline 070-4445454 to inform about locations of elephant herds on railway lines countrywide with the help of the Department of Wildlife Conservation.

Speaking to the media at a media briefing at the Railways Head Quarters, the General Manager of Railways (GMR) M.J. Dilantha Fernando said train-elephant collisions could not be stopped 100 percent but it could be controlled.

“Therefore, the Railways Department decided to introduce a hotline to minimise the accidents,” he said.

“Most of the accidents occurred beyond the Maho Junction and the Department had decided to clear 15-meter wide stretch from both sides of the track to enhance a clear vision for the engine driver and people,” he said.

He said that measures had been taken to fill railway sleepers filled with metal for an easy crossing for elephants. He added that the railway engines will be equipped with powerful headlights to detect movements of elephants.

“People can inform about elephant herds through the hotline 24-hours. As soon as an SMS sent to through this number it will be recorded in a system in the Wildlife Department. “Then the SMS will be forwarded to Railways Department and then forwarded to a registered group in the railways.

The SMS will be delivered among the group as ‘Elephant ALT’,” he said. He said that a typical SMS Alert would indicate the number of elephants, location, area, and the time and the track. Sample SMS – ElephantALT – Elephant Herd – Seen at 128.5 mile post – Between Galgamuwa-Tabuttegama at 19.34 – North Line.