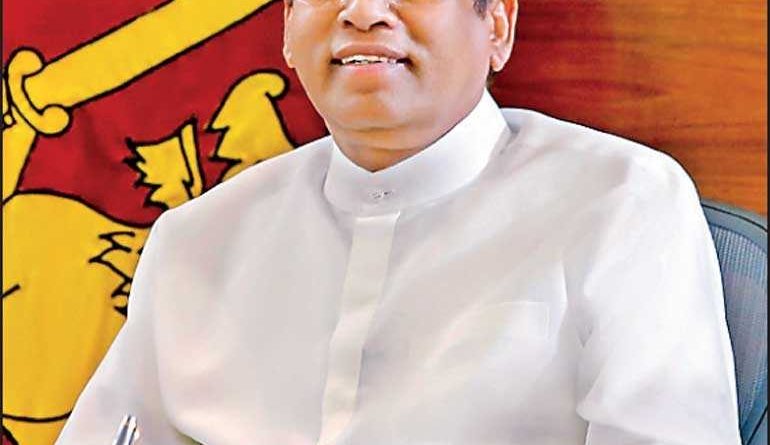 President Maithripala Sirisena will use constitutional provisions that enable him to access public funds sans parliamentary approval to fund government expenditure until March 2019 in place of a Budget if Parliament is dissolved, his spokesman said yesterday.

A Vote on Account to access funds was given the nod at a meeting of the Cabinet appointed by President Sirisena which he presided over yesterday.

Speaking at a press briefing held at the Sri Lanka Freedom Party (SLFP) head office, MP Mahinda Samarasinghe said the Vote on Account seeks to access funds to manage state affairs for up to three months in 2019. The Vote on Account (VoA) was presented by Sirisena’s Finance Minister Mahinda Rajapaksa. However, it is uncertain when the VoA is to be presented in Parliament or if it will be presented. Samarasinghe also argued that there were provisions in the Constitution giving the President power to gazette the VoA in the event the Parliament stands dissolved. The provision allows access to money from the Consolidated Fund for a period of three months.

“To access funds from 1 January next year, we need either a Budget or a Vote on Account.

The Vote on Account has been approved by Cabinet. If Court upholds the decision to dissolve Parliament, there are provisions in the Constitution giving power to the President under Article 150 (3). He can issue a proclamation and gazette the Vote on Account. It is legal to do so and this is allowed for three months,” he claimed.

Article 150. (3) reads as follows: “Where the President dissolves Parliament before the Appropriation Bill for the financial year has passed into law, he may, unless Parliament shall have already made provision, authorize the issue from the Consolidated Fund and the expenditure of such sums as he may consider necessary for the public services until the expiry of a period of three months from the date on which the new Parliament is summoned to meet.”

Assuring that all necessary actions would be taken to ensure that the country could be run smoothly in any event, Samarasinghe claimed that the relevant officials had initiated action on the matter already, insisting that there would be no issue to access funds until the end of the year.

“We don’t have an issue in accessing funds in 2018, as once the Appropriation Bill can be approved in Parliament we can then access funds from the Consolidated Fund based on that. It is legal. There is legislation in the country to make loan repayments without it being referred to Parliament,” he said.

The SLFP is likely to boycott the debate on the motion presented by a group of United National Party Parliamentarians to block funds to the office of the Prime Minister, citing that debating an issue which is before a court of law is sub judice. A group led by UNP parliamentarians has filed a Quo Warranto case before the Court of Appeal regarding former President Mahinda Rajapaksa holding the office of Prime Minister when two no confidence motions had been passed against him in Parliament.

“We are not sure if this can be taken up and we have asked the Speaker to seek the opinion of the Attorney General on the matter,” SLFP spokesperson MP Dayasiri Jayasekara explained. The SLFP is set to make a final decision on the matter today when the parliamentary group meets, he said.

“The tradition and process of separation of power dictates that the Legislature and Judiciary do not trespass onto each other’s territory,” Jayasekera said.

Agreeing with his colleague, Samarasinghe also objected to the clauses included in the motion, which indicate that two gazettes issued by the President, first removing the sitting Prime Minister and the second appointing a new one, were illegal.

“First of all we must decide whether this motion can be tabled in Parliament as it questions the actions taken by President Sirisena and the release of two presidential gazette notifications,” he said.

The President in a party leaders meeting earlier objected to the no confidence motion based on that clause, saying he would accept a revised motion passed in Parliament without the clause.