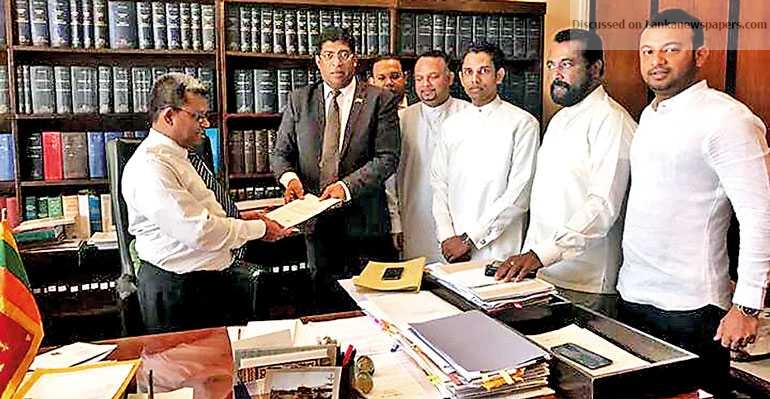 Upping the ante after two votes on the No Confidence Motion, a group of United National Party (UNP) Parliamentarians yesterday presented a motion to limit access of public funds by the Prime Minister’s Office, to a quieter than usual Parliament.

Adhering to the view that the no confidence vote passed in Parliament on MP Mahinda Rajapaksa last week was valid, the group of UNP MPs, which included UNP MPs Ravi Karunanayake and Navin Dissanayake, presented the motion on the basis that Parliament is responsible for public finance. The latest motion by the UNP was supported by 122 Parliamentarians, which is the same number as those who signed the No Confidence Motion.

Key Opposition parties such as the Tamil National Alliance (TNA) and the Janatha Vimukthi Peramuna (JVP) extended their support as well.

The motion was presented at the party leaders meeting, which took place before sessions commenced on Monday. The motion was accepted according to the Agenda, and will be given five days’ notice in the Order Book, before it is taken up for debate. Proponents of the motion insisted that it would be taken up during the Parliamentary sitting on 29 November, while pro-Rajapaksa MPs claimed that no final decision has been made on the date for the debate.

“We have presented a motion, from the group of 122, to stop the authorisation to withdraw monies by the Secretary to the Prime Minister, since Parliament has complete control over public finance under Article 148 of the Constitution, and since under Article 48 of the Constitution, the Parliament has approved a no confidence motion by operation of law the Cabinet stands dissolved,” TNA MP M.A. Sumanthiran speaking at a media briefing held in Parliament Complex.

“In view of that fact we have given notice of a motion, presently only to the Secretary to the Prime Minister. We have not taken the step to block funding to other Ministries. This is a token of what Parliament powers can exercise, when the group claiming to be the Government does not have the majority in Parliament and refuses to bow to a vote of no confidence, not just once but three times in three days last week,” he added.

The JVP insisted that the Speaker’s ruling dissolving the Government of MP Mahinda Rajapaksa resulted in Rajapaksa no longer having the authority to spend public funds. Rajapaksa was appointed as Finance Minister by President Maithripala Sirisena, shortly after he was appointed as Prime Minister on 26 October.

“According to the statement made by Speaker Karu Jayasuriya on 15 November, Prime Minister Mahinda Rajapaksa and Government ceased to exist. Therefore he has no power to spend public money,” JVP leader Anura Kumara Dissanayake told a press conference held at the Parliamentary complex. “Parliament has the power over public finances and it was on that basis this motion was submitted.”

The motion is likely to be put to vote on 29 November, however according to SLFP MP Mahinda Samarasinghe, no final decision had been made to include the motion in the Order Paper of Parliament by Speaker Jayasuriya.

“We urge the Speaker to seek legal counsel from the Attorney General’s Department before including this motion in the Order Paper, as its legal validity is under question. President Sirisena has not accepted the No Confidence Motion. Therefore, a document that presumes the No Confidence Motion is valid is questionable. We feel that this is not legal,” Samarasinghe told reporters at a press conference at the Government Information Department after Parliament was adjourned.

The move drew swift criticism from other pro-Rajapaksa parliamentarians, who also concurred with Samarasinghe’s view that the No Confidence Motion was not valid till President Sirisena accepted it, and moved to officially remove Rajapaksa as Prime Minister. They charged that the Sirisena-Rajapaksa Government remained and as such the Cabinet had legal access to public finances.

“The motion was to suspend all Government expenses. The motion proposes to cut off all finances, but a motion on finance cannot be brought by any other party except the Government side,” insisted MP Dinesh Gunawardana.

MP S. B. Dissanayake also dismissed the motion, claiming it was an attempt to “sabotage” the Sirisena-Rajapaksa Government.

“They gave a document today, saying that Prime Minister’s Secretary has no power to issue instructions on Government finances. This is a clear attempt to sabotage the work of the Government,” S.B. Dissanayake charged. “We can work with Speaker Karu Jayasuriya, but if he is not willing, then we will govern the country with Prime Minister Mahinda Rajapaksa and the Government.”

During the party leaders meeting it was also decided to establish a Committee of Selection as customary to set up the relevant committees in parliament, including the disciplinary committee.

Soon after the House sat yesterday afternoon, the Deputy Speaker and the Chairman of Committees J. M. Ananda Kumarasiri invited nomination of Members for the Committee of Selection. “Speaker has agreed the Party Leaders should establish the Committee of Selection. The members to this committee will be appointed to represent all political parties signified in the Parliament. Speaker requests the proposed names to be submitted to the Secretary General without a delay,” Deputy Speaker Kumarasiri said.

MP Dinesh Gunawardena, raising a point of order said the appointment of the Selection Committee must be done giving due recognition to the Government led by PM Mahinda Rajapaksa, noting that his group should get majority in the committee.

“The Parliament affairs are handled by the Government and we are in the Government now. We must get the majority in the Section Committee to run its affairs smoothly,” he told the House.

However, his stance was disputed by both UNP MP Mangala Samaraweera and JVP MP Anura Kumara Dissanayaka, who insisted that the House does not recognise any Government or Prime Minister following the No Confidence Motions. Dissanayaka noted that it is not fair to demand majority in the Committee of Selection as done by the Mahinda Rajapaksa-led group, when they lack majority in the House. “The Selection Committee must reflect the current composition of members in the House,” he told the House.

The Committee of Selection is appointed at the commencement of every session to consider the constitution, number, functions and quorum of Sectoral Oversight Committees and Ministerial Consultative Committees, and to report with all convenient speed their opinions thereon to Parliament, and to nominate Members to serve upon the 12 other important committees. The Committee of Selection consists of the Speaker, as Chairman, and 12 other members, including the leaders of political parties or their nominees, to be nominated by the Parliament at the commencement of each session.