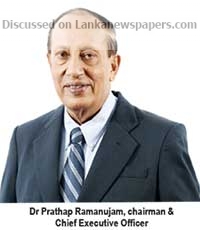 Panasian Power PLC (PAP.N), one of Sri Lanka’s leading green energy solutions providers, posted a consolidated net profit of Rs. 54 million for the quarter and Rs. 153 million for the six months ending 30th September, 2018. This represents a 110% and 452% increase respectively over the corresponding period of the previous year. Furthermore, operating profit for the quarter increased to Rs. 74.7 million from Rs. 41.8 million during the same period the previous year. This represents a growth of 79% for the quarter and a total growth of 159% for the half year despite the increase in costs.

During this period the Group’s revenue increased by 137% compared to the previous six months, once again due to major contributions from the Padiyapelella and the Rathganga mini hydropower plants. By exercising prudent cost control practices, the Group was able to reduce the finance cost by 9% to Rs. 45.5 million during the same period.

Commenting on these strong results, Panasian Power Chief Executive Officer Dr. Prathap Ramanujam said, “We are pleased to once again post strong results thereby validating the confidence all our shareholders have in us. This continued success is only possible thanks to the calculated steps we took last year to diversify our income streams and implement vigilant cost control measures that have helped grow our bottom line. We have since gone from strength to strength and fully expect this trend to continue in the near term as we unveil and complete new hydro and solar projects that take our country closer to a clean, green energy future.” (Panasian Power)