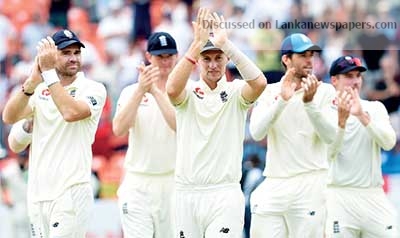 England’s spin trio of Jack Leach, Moeen Ali and Adil Rashid teamed up to give their team a famous series win over Sire Lanka at the Pallekele International Stadium yesterday. Chasing a 301 run target to square the three match series, Sri Lanka were bowled out for 243 runs to give England a 57 run win. The tourists wrapped up the three match series with a game to spare.

Sri Lanka required 75 runs with three wickets in hand on the final morning but were bowled out for 243 runs as England dismissed the last three batsmen within 32 minutes of final day’s play.

Sri Lanka’s chances depended on Niroshan Dickwella, who was 27 not out overnight but he was dismissed for 35 when Ben Stokes took a catch off Moeen’s bowling. Two balls later Suranga Lakmall was bowled by Moeen to take England closer to victory.

Jack Leach completed the win when he took a return catch off last man Malinda Pushpakumara. The left-arm spinner finished with a maiden five wicket haul and claimed a match bag of eight wickets playing only his third Test match.

Captain Joe Root was named Man of the Match for his century in the second innings.

The tourists won the first Test in Galle by 211 runs.

The teams will now head to Colombo where the third Test will be played at the Sinhalese Sports Club ground starting on Friday.

Off-spinner Akila Dananjaya will miss the third Test as he will travel to Brisbane, Australia to complete testing after his action was reported as suspect.