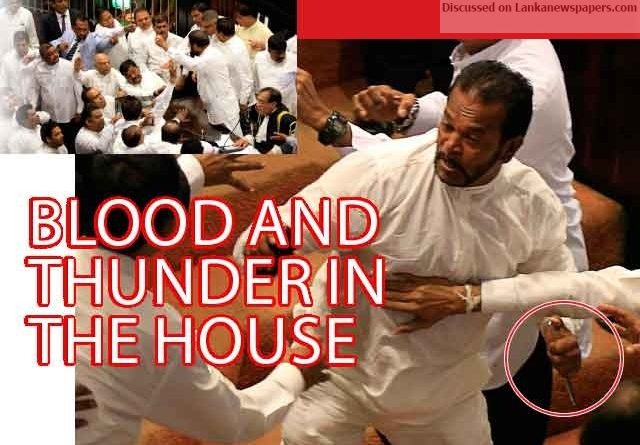 For the second day in succession Parliament descended into chaos, but this time with serious consequences.

The violence erupted after Speaker Karu Jayasuriya asked the House whether they agree to take a vote by name on a speech that was just delivered by the appointed Prime Minister Mahinda Rajapaksa.  Members supporting Rajapaksa rushed to the Speaker’s chair and United National Party MPs rushed towards them to protect Jayasuriya. In the ensuing melee several MPs and a Parliament staffer were injured.

One MP needed hospital treatment.
It was also the first time in the history of the Sri Lankan Parliament that the Speaker of the House came under physical threat.
Yesterday’s Parliamentary Sitting was commenced with the United People’s Freedom Alliance (UPFA) MPs hooting at Speaker Karu Jayasuriya, when he assumed the Speaker’s chair. The Speaker, who responded with a nod and saying ‘Thank you’, urged all the MPs to act with honour and dignity.

Former President Mahinda Rajapaksa had assumed the PM’s seat in the Chamber. Ousted Premier Ranil Wickremesinghe had chosen a back row of the Opposition benches, same as the previous day (14)
At the commencement of the Sitting, Speaker Jayasuriya announced that he would not recognize any MP as the Premier, a Cabinet Minister, a State or a Deputy Minister, a Leader of the House and a Chief Government Whip as the Cabinet of Ministers stands dissolved after the No-Confidence Motion on Wednesday (14).
Speaker Jayasuriya: “Since a new Prime Minister and a Cabinet have not been appointed thus far, there is a free sitting in the Chamber for the convenience of the business of the day.”
He further said, amidst the growing tension, “I also should remind all of you that, the final decision on all the parliamentary affairs is with the Speaker according to the Standing Ordersof Parliament. Such decisions can only be challenged inside the Chamber.”

While the Speaker went on further, MP Dinesh Gunawardena interrupted and said before going further the Speaker should read President Maithripala Sirisena’s reply to him in which the President said that he does not accept the NCM.
Speaker Jayasuriya: “I’m also sending a reply to the President. I will read President’s letter along with that reply. Now I give the floor to MP Mahinda Rajapaksa to make his speech.”
Then, Rajapaksa began to deliver his statement. While he was continuing the Speech, there was a disturbance from the Opposition side. Responding, Rajapaksa said, “This is not a big thing to me. I have sat on this chair before. I have held both the posts of the President and Prime Minister. They are not big things to me.

After he concluded the speech, UNP MP Lakshman Kiriella moved a motion saying that the majority of the House had no confidence in the statement made by Rajapaksa. Kiriella then called for a division by name on Rajapaksa’s statement.  As the Speaker let the House decide on whether there would be a vote on it, the UPFA MPs started protesting against it.
Former Deputy Speaker Thilanga Sumathipala hurriedly went near the Speaker’s Chair and both were seen engaging in a heated argument.
Sumathipala: “You should act according to the democracy.”
Speaker Jayasuriya: “I am trying. But you people are not letting me to do it.”
A group of the UPFA MPs, who followed Sumathipala, placed the Speaker under a complete siege. While they were shouting and pointing their hands at the Speaker, a group of the UNP MPs, including Ranjan Ramanayake, Kavinda Jayawardena, Kabir Hashim, Hector Appuhamy, Asoka Abeysinghe and Mangala Samaraweera rushed towards the Speaker and created a protective ring around him.

Exchanges were getting more and more heated with the MPs of the two parties begining to exchange blows. Noticing this, Sergeant-at-Arms Narendra Fernando held the Mace in his hand to prevent the MPs from grabbing it.
Amidst the clashes, a water bottle, a dustbin, a copy of the Constitution were seen hurled at the Speaker by the UPFA MPs. The UNP MP Daya Gamage caught the copy of the Constitution. The dustbin was seen being tossed from one side to the other.
MPs Prasanna Ranaweera, Mahindanada Aluthgamage, Harin Fernando and Navin Dissanayake were seen exchanging heavy blows. MP Sidney Jayaratne and few others thudded to the floor after being caught up in the melee.
While MP Patali Chamipka Ranawaka was in a conversation with Former President Mahinda Rajapaksa, MP Lohan Ratwatte hurried towards him and pushed him back. Rajapaksa was seen trying to instruct Ratwatte not to do that.

Ousted PM Ranil Wickremesinghe was seen seated silently throughout the bloody brawl while senior MPs of  both sides, including Patali Champika Ranawaka, Vijith Vijithamuni de Soysa and Sajith Premadasa were seen trying to separate the fighting MPs.
MP Ananda Aluthgamage grabbed the Speaker’s microphone and MP Dilum Amunugama tried to remove wires of the microphone and injured himself in the process. After injuring himself, Amunugama went out of the Chamber wiping away the blood from his injured hand. He was later taken to a hospital.
Ananda Aluthgamage, Prasanna Ranaweera, Mahindananda Aluthgamage, Piyal Nishantha, Udaya Padmashantha and Palitha Thewarapperuma were noted for their violent behavior.

Palitha Thewarapperuma was seen with a butter knife. When he was approaching a group of clashing MPs with the knife in his hand, Johnston Fernando jumped in front of him, pushed and punched him. Daya Gamage was trying to separate Thewarapperuma, Fernando and the other bunch of clashing MPs.
The UPFA MPs repeatedly hurled abused at the Speaker.  Dilan Perera and Pavithra Wanniarachchi then began the slogan “Muutavada Paba hondai” (Paba is better than him (the Speaker).
After few minutes, the beleaguered Speaker left the Chamber. The Serjeant-at-Arms also followed the Speaker with the Mace.
While the UPFA MPs cheered “Jaya Wewa” Rajapaksa and Wickremesinghe also left the chamber. Rajapaksa waved at reporters and others who were seated at the gallery while walking out of the Chamber.

In response to Dilan Perera and Pavithra Wanniarachchi, the UNP MPs came up with a slogan “Mahinda hora penalagiya”  (Mahinda, the thief fled).
The UPFA MPs replied “Benku hora penalagiya” (Bank thief fled).
The Janatha Vimukthi Peramuna MPs joined with them with a slogan, “horu dennama penalagiya” (Both of thieves fled).
After the Speaker left, Prasanna Ranaweera was seen pouring water on Speaker’s chair.
Even after the Speaker left the Chamber, several MPs remained in the Chamber sitting on the steps near the Speaker’s Chair. They were seen chatting and laughing.
MP Susantha Punchinilame, who sat on the Secretary General’s Chair, was seen video recording the entire series of unfortunate events that had triggered in the Chamber.

The Party Leaders, who met shortly after the bloody brawl, decided to commence the next Sitting at 1.30p.m. today.

One thought on “The Janatha Vimukthi Peramuna (JVP) said today the request that is being made by the government to go for a general election is not a genuine one. JVP MP Sunil Handunetti said if the government really wanted to go for an election, they would support to get two-thirds majority in Parliament. “There will be no free and fair general election if the election is held under the present regime,” he said. “Can one expect a group who does not allow the House to be conducted in an orderly manner to conduct a free and fair election?” he questioned. He charged that one MP had broken the microphone at Speaker’s chair during the commotion. “This MP will have to pay damages to the House,” he said.”