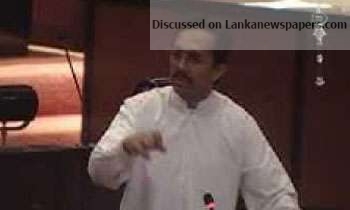 The Janatha Vimukthi Peramuna (JVP) said today the request that is being made by the government to go for a general election is not a genuine one.

JVP MP Sunil Handunetti said if the government really wanted to go for an election, they would support to get two-thirds majority in Parliament.

“There will be no free and fair general election if the election is held under the present regime,” he said.

“Can one expect a group who does not allow the House to be conducted in an orderly manner to conduct a free and fair election?” he questioned.

He charged that one MP had broken the microphone at Speaker’s chair during the commotion. “This MP will have to pay damages to the House,” he said.