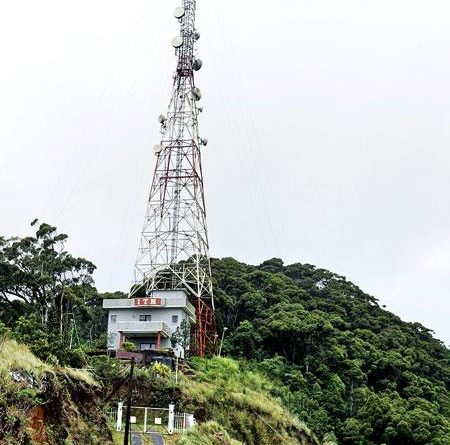 A narrow but concrete carpeted road leads to the hill in Suriyakanda where in 1994 a gruesome mass grave was unearthed shocking the entire nation. The area even after more than two decades, remains remote and isolated except for a house or two among the tea plantations dotting the path. The very steep and difficult climb up the road brings one to the Sri Lanka Telecom, ITN and Rupavahini towers on the hill, while no indication remains of the scenes of horror encountered by the residents of Embilipitiya that fateful day in 1994,when skeletal remains believed to be that of the students missing from the Embilipitiya Madhya Maha Vidyalaya were discovered, on a tip-off received. But nevertheless, the surrounding area is cold and eerie, giving a sense of the tragic events that once unfolded there. Though its forensic investigations stalled many years ago, its residents to this day remain hesitant to talk about the past.

It began in 1994 when a witness, whose identity remains secret, decided to speak up and reveal that a mass grave containing skeletal remains of a number of individuals are located on this hill. It was just several years after the 1987-89 Janatha Vimukthi Peramuna (JVP) Insurrection which had brought the Sri Lankan government to near collapse.

As terror reigned the country, with JVP’s death squads killing those believed to be linked to the government, while in return, State-backed groups sought to ‘search, interrogate and destroy’ suspected JVP members. 60,000 youth are believed to have been killed during the time period. As a result students of several schools in the Embilipitiya area suspected of taking part in JVP activities had gone missing between the months of August – December in 1989. The majority of them at the time were students of the Embilipitiya Madhya Maha Vidyalaya. The youth who were hauled away just disappeared without a trace. 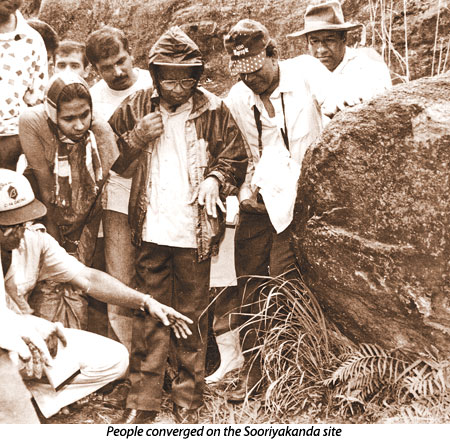 Several years on with a government project to install a Ceylon Electricity Board (CEB) tower on the very same hill threatening to conceal the site forever, the witness had finally plucked up the courage to reveal the information he had to Victor Ivan, Editor of the Sinhala weekly, Ravaya, and politician S.B Dissanayake. Recalling the incident, parliamentarian S.B Dissanayake says it was Victor Ivan that initially informed him regarding the mass grave. Failing to obtain the support of any government official, Ravaya, in the end, sought to uncover the mass grave with the support of the country’s political opposition at the time.

The chosen date was January 3, 1994. ‘Having conveyed the information to Chandrika Bandaranaike Kumaratunga and Anurauddha Ratawatte we decided we would visit the site secretly to uncover more information’, Dissanayake recalls. Joining them at the time were current day political heavyweights such as Minister Mangala Samaraweera and Joint Opposition MP Pavithra Wanniarachchi, media personnel and many others.

According to Dissanayake, on reaching the spot the group began searching for the skeletal remains, but to no avail. ‘We tried a different area thereafter and had almost given up, when a stench began wafting through the air,’ he recalls.On digging further, finally bones and clothing began to appear.

‘Some requested them to be checked for carbon dating but the government ignored that’ Dissayanake says.’

‘We took around 10 samples and reported the incident to the Embilipitiya Magistrate’s Court thereafter,” Dissanayake said.

While the magistrate ordered the official excavations to begin on January 8 this news spread like wildfire, with villagers and grieving parents of the missing children converging on Suriyakanda. Among the crowd were also politicians, lawyers and media personnel. Notably, this was the first time in the country’s history that a mass grave was to be disinterred.

While the trio had previous experience through taking part in similar excavations abroad, however, the situation soon began to spiral out of control with the public and even politicians taking part in the excavation, digging with their bare hands while not following the disinterment procedures required in this situation. Skeletal remains were stacked up around the grave while the clothes found on the bodies were separated as well. At the time Sri Lanka did not have the necessary DNA technology to identify the remains and therefore the advice of the medical officers heading the excavation was to proceed with great care while preserving the integrity of the remains. But what took place was in stark contrast to what was required. Visitors to the grave took part in the excavations, others were seen hugging the excavated skeletal remains and crying. Some were found to have taken remains home without the knowledge of the officials.

Recalling a personal experience at the time, Dissanayake says returning home one day he encountered the sight of his sons at swordplay with sticks which looked suspiciously like skeletal remains. ‘I asked them where they found these from,’ Dissanayake says adding that the children replied that they had brought these bones back from the Sooriyakanda mass grave, following a visit.

Frustrated by the scenario at the site, the JMO’s decided to halt the investigations leaving the mass grave without a forensic determination while the majority of the skeletons remain unidentified to this day.

According to Dissanayake the main aim at the time was to reveal that the then government ordered the killings of innocents. ‘We didn’t have an interest in the situation beyond that’ he admits claiming it was not a time a proper investigation could have been conducted. He says what happened to the collected remains is not known. ‘Some were sent to the Magistrates who sent them on for analysis, that is all I know’ he claims.

Therefore although the suspected killers of the students were finally brought to book based on witness statements and other evidence, the grieving parents received no closure, unable to identify the bodies of their missing children due to the botched forensic investigation.

‘They did not ensure these investigations continue till a logical result is achieved’ accuses Victor Ivan. According to him, the situation was merely used for political benefit. Ivan says he believes if inquiries at a deeper level had been conducted it could have been a turning point in the country’s history. ‘Perhaps the situation of the country today would have been different if positive steps had been taken at the time,’ he says.

Perhaps the recently appointed Office on Missing Persons (OMP) to address the issues faced by the missing and the disappeared, took the events at Suriyakanda as a lesson learnt when it decided to fund the excavations of the recently discovered Mannar mass grave, while also deciding to support the process to ensure its integrity and uninterrupted continuation.

‘This is why the OMP decided to fund the excavations at the recently discovered Mannar grave’, says Saliya Peiris PC Chairman of the Office on Missing Persons. According to him, it is absolutely important to conserve the integrity of a mass grave as without this information one cannot identify the victims while excavations must be done with proper planning.

Meanwhile, Ivan feels Sri Lankan society is still traumatized by these disappearances. ‘During the last three decades of terror some people died physically while others died spiritually’ he says, adding that these experiences continue to rot our society today. ‘The victims and perpetrators both undergo changes as a result of the gruesome acts,’ Ivan says.

According to him many countries, therefore, have attempted to seriously revisit these incidents to reflect on what occurred while allowing those affected to express their grief freely and openly. ‘We still have no process to take similar steps’ he says, adding that it appears our rulers have no vision in this regard.

But perhaps realising this fact, in its recent interim report the OMP has in some form tried to respond to the families, by recommending that the government restore the ‘Ahinsakaramaya’ memorial for innocents in Battaramulla while also recommending that sites of mass graves be declared memorial sites. Perhaps in time Suriyakanda too will some day become a memorial site, far different from the forlorn hillside it is today.

Since the discovery of a mass grave in Mannar town, the excavations to recover its skeletal remains commenced on May 28. Unlike at Suriyakanda (over two decades ago), the Mannar mass grave’s disinterment since the inception has been conducted with great care and according to accepted procedures. Up to date around 200 skeletal remains have been discovered by the investigating team including those believed to be of women and children.

However steps have been taken to not only ensure the excavation continues unhindered but also to preserve the integrity of the remains for identification purposes. As a result, the authorities have been vacillating, while issuing various limitations on excavation staff and Media.

Therefore while the Media was allowed to freely visit the site and obtain information at the beginning, later considering a request by the Mannar Police the previous Mannar Magistrate T.J Prabhakaran issued an injunction in August preventing journalists from visiting the site. However, the order was later removed after a motion was submitted by several media personnel requesting access to the site.

However, with T. Saravanaraj being appointed as the new Mannar Magistrate it was decided by him that details regarding the excavation and its forensic analysis could only be obtained through the Registrar of the Mannar Magistrate’s court thus preventing the Scientists involved in the excavation from disclosing any direct information regarding the site. The intention was to ensure that only authoritative information regarding the mass graves is presented to the general public.

But following a request from the Office of Missing Persons and the families of the disappeared, the Magistrate later decided to grant the authority to provide information to the Chief Judicial Medical Officer in charge of the excavations Saminda Rajapaksa.