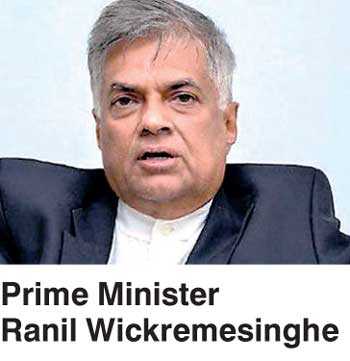 Prime Minister Ranil Wickremesinghe yesterday confirmed that President Maithripala Sirisena had in fact insinuated that an Indian spy agency was involved in plotting his assassination at a heated Cabinet meeting two weeks ago.

Details of the explosive Cabinet meeting made local and international headlines, but President Sirisena and members of the Government staunchly denied the claims, which Presidential aides said nearly caused an ‘intra-State crisis’.

In an interview with NDTV’s Sreenivasan Jain from Temple Trees yesterday, when asked about President Sirisena’s alleged statement, Wickremesinghe said: “There was an insinuation. That’s how many members of the Cabinet construed it – maybe he said it in the heat of the moment.”

Wickremesinghe added that the Government of Sri Lanka says there was no involvement from India. “That’s the position of Sri Lanka.”

Wickremesinghe told NDTV that the threat of assassination cited by President Sirisena as a reason for his sacking was just “an excuse”.

“He would have told me or the Cabinet if there was some evidence,” he said.

As Sri Lanka’s major constitutional deadlock, which some analysts have referred to as an illegal power grab, completes one week, Wickremesinghe said he refuses to leave his Official Residence, Temple Trees.

“Sri Lanka, at the moment, has no Government. No one knows what the legal situation is,” he added in the interview.

The ousted Premier also told NDTV that his MPs were being offered vast sums of money to defect to the Sirisena-Rajapaksa camp. “Sometimes, the calls come in while they are in discussions with me,” he said.