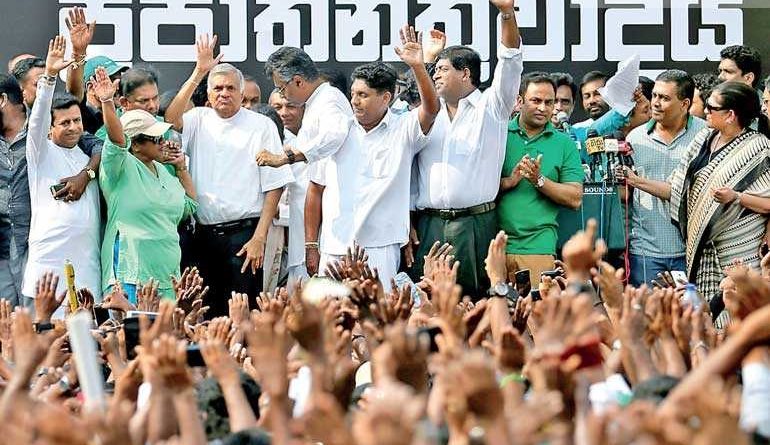 Thousands of protestors yesterday thronged the Liberty Roundabout in an unexpectedly massive show of support for mounting calls on the Speaker of Parliament to reconvene the House and end the constitutional deadlock, even as Ranil Wickremesinghe, who was controversially deposed as Prime Minister last week, stood his ground for a fifth straight day.

Speaking to the large crowds gathered outside his official residence, Wickremesinghe used the words “attempted coup” for the first time to speak of his removal,which many legal experts have called illegal and extra-constitutional.

“The attempted coup is not a threat to a single person or political party; it is an attack on the very foundations of our nation – law, order, democracy, the Constitution- and therefore a threat to every Sri Lankan,” he told the protestors.

Issuing a broadside at President Maithripala Sirisena, the ousted Prime Minister,whose sacking of Wickremesinghe triggered a major constitutional crisis last Friday (26), charged: “It is the people that are sovereign in Sri Lanka, not the President.

Convene Parliament now and let the people’s will be done.”

It was the first time in five days that the deposed Prime Minister, who appeared to be wearing a bulletproof vest, stepped out of Temple Trees – as far as the gate of the residence, where UNP politicos gave rousing speeches from a mobile stage erected on the back of a truck.

There are fears that if Wickremesinghe ventures out too far, Temple Trees will be “overrun” his aides say and that he would be prevented from returning. The stately residence has been associated with the Sri Lankan premiership for decades and lends an aura of legitimacy to Wickremesinghe’s claim that he remains the lawful Prime Minister of Sri Lanka.

“He should not budge,” senior constitutional lawyer and MP Jayampathy Wickremaratne told Daily FT, “Until Parliament dismisses him in accordance with the Constitution, either by defeating him at the Budget or through a no-confidence motion.”

The UNP bussed crowds of supporters in to attend the rally but the protest drew an unconventional crowd, including young people, civil society activists and Colombo residents, many of whom were attending their very first public demonstration.

The epicentre of the protest was a stage at the entrance to Temple Trees from St. Michael’s Road but the crowd spread out to the Liberty Roundabout and sections of Dharmapala Mawatha and Duplication Road.

Speaker after speaker at the rally referred to the newly-installed Rajapaksa Government as a “junta” that was storming ministries and media institutions in a bid to grab power unconstitutionally.

“Just because the President has abandoned his January 8 mandate, it doesn’t mean we have. Our battle goes on,” former Health Minister Rajitha Senaratne charged during his speech.

The former Minister was the first to join President Sirisena when he left former President Rajapaksa’s Government to challenge him in 2014.

“They will intimidate us and try to throw us in jail; even if we are thrown in jail, you keep fighting, let’s take this fight from the Parliament to the President’s House,” Senaratne charged.

Former Minister Sarath Fonseka stated that President Sirisena had totally neglected the Constitution and crushed the democratic rights of the people “in order to achieve his petty political ambitions and strengthen his political journey”.

“We all must get together to save this country.They are threatening to put us behind bars. We are ready to go to prison. We are the people who fought with Mahinda Rajapaksa, who was stronger, and we are ready to fight with Maithripala Sirisena,” he asserted.

UNP spokesperson Harin Fernando emphatically declared: “We are the people who brought Maithripala Sirisena to power and it will be us who will send him home.”

Fernando bellowed that the UNP would continue to push for Parliament to convene and resolve the current standoff.

“The struggle today is not to protect Ranil but to protect democracy and good governance,” Fernando later told Daily FT.

“It was heartening to see so many members from civil society coming out onto the road to stand against the political coup staged by the President, especially when the old fears of suppression return with the return of Mahinda Rajapaksa. People have unpleasant memories of what happened during the Rajapaksa era and those are legitimate fears as he has grabbed power again. Yet they are coming out to stand for democracy in the country,” he added.

Many participants at the rally were vocal about the fact that they were not supportive of ousted Premier Wickremesinghe or the UNP, insisting that they were standing at the demonstration for democracy and constitutional governance.

Ayomi Fonseka, 56, a retired accountant, said she was no fan of Wickremesinghe but insisted: “If the people don’t stand for democracy, these rotters (she pointed to the politicians onstage some distance away) won’t do a thing.”

A Sirisena voter in 2015, she said at the time that she would have voted “for Satan” against former President Rajapaksa. An expat who returned to the country soon after the war ended in 2009, Fonseka said she vividly remembers the fear psychosis that had gripped the country during the Rajapaksa’s tenure.

“We had to talk in code, even with friends. Rajapaksa brings back a culture of fear,” she said.

Demonstrators like Fonseka held up placards saying ‘I’m not here for Ranil, I’m here for democracy’.

Nuzra Hussein, dressed in a colourful hijab, was one of the earliest to show up at the democracy rally. Standing in the scorching heat, Hussein said she was standing for democracy but was full of criticism for Wickremesinghe. “But the President cannot do this, he can’t just throw aside the Constitution,” she cried.

Even as the massive rally unfolded on the streets of Colombo, parliamentarians from almost all parties urged Speaker Karu Jayasuriya to convene Parliament in defiance of the President’s prorogation, insisting that he had the power to do so. Speaker Jayasuriya promised to meet with President Sirisena and urge him to convene the House.

Out on the streets, the people echoed the call.

“President Sirisena is feeling the pressure internationally and the good turnout at the rally is significant because it shows that pressure is mounting domestically as well,” Dr. Uyangoda explained.

A supporter of Prime Minister Ranil Wickremesinghe dances with a puppet with President Maithripala Sirisena’s picture during a protest against his removal, near the Prime Minister’s official residence in Colombo yesterday – Reuters