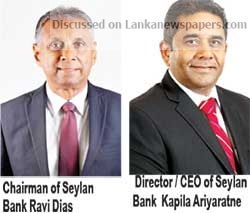 The Bank closed the 9 months ending September 30 2018 with a post-tax profit of Rs. 3,138 million, a moderate growth of 4.5 % over the corresponding period last year in the backdrop of challenging market conditions.

The Bank increased its Net Interest Income and recorded a commendable growth of 14.4% to reach Rs. 13,013 Million in spite of the mounting pressure on the margins due to rising cost of funds. The Net interest Margin contracted from 4.2% in 2017 to 4.1% in 3Q 2018 due to cost of deposits increased at a faster rate.

Net fee and commission income witnessed a moderate growth of 7.1% from Rs. 2,753 million to Rs. 2,948 million in 3Q 2018. This was mainly attributed from core banking related business.

Other operating income comprising net gains from trading, gains on financial investments, gains on foreign exchange decreased by 18.6% from Rs. 1,227 Million reported in 3Q – 2017 to Rs. 998 Million in 3Q-2018.

The total impairment costs of the Bank increased by 33.6% from Rs.1,440 Million to Rs. 1,923 million. Further, SLFRS 09, issued in July 2014, is effective for annual periods beginning on or after 1 January 2018, with early adoption permitted. It replaces LKAS 39 Financial Instruments: Recognition and Measurement.

The Bank has assessed the impact on transition based on gap analysis and quantifications performed on its Financial Statements as at 31st December 2016 on adoption of SLFRS 9 with the assistance of an external consultant. Based on the preliminary assessments undertaken, the estimated additional impairment provision on the Financial Statements for the year ended December 31, 2017, on adoption of SLFRS 9 is expected to be in the range of 30% to 45% of the total impairment provision on different portfolios.

Total expenses increased by 8.3% from Rs. 8,200 million to Rs. 8,885 million and were fuelled by new investments in technology, branch expansion etc.

Cost efficiency and productivity have taken a predominant role in the Bank’s day-to-day operations. The Bank continues to focus on cost initiatives coupled with process re-engineering and exploring ways of inculcating a culture of working smarter across all the functions by the employees.