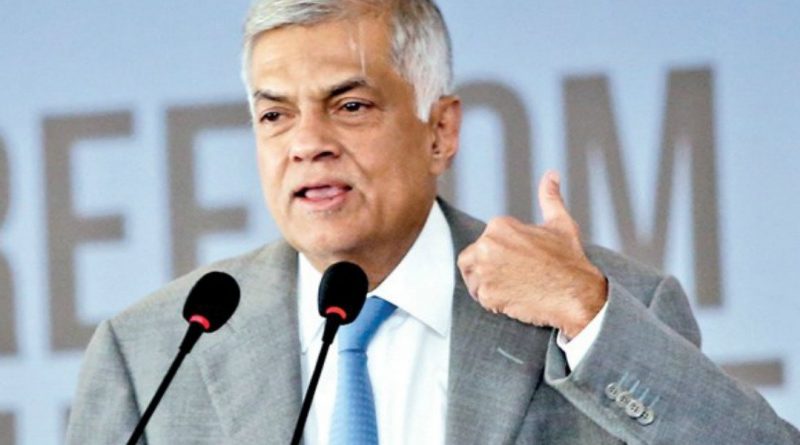 …says he can be removed only by Parliament

Ranil Wickremesinghe insisted last night that he was still the Prime Minister even as Mahinda Rajapaksa was sworn in as Prime Minister by President Maithripala Sirisena.

Addresssing the media at Temple Trees, Wickremesinghe said that in terms of 40 ( 2 ) of the Constitution, he was still the Prime Minister and would function in that position, until he was removed by Parliament. ” The No – Confidence Motion brought against me on April 4 ,this year was defeated convincingly . So if anyone wants to oust me, he should go back to Parliament and show his majority in the House. Until such time I remain the Prime Minister.”

Asked about the status of the Cabinet of Ministers Wickremesinghe said that he had not effected any changes , but some had submitted letters saying that they had quit the Cabinet. “Once the situation is clear, I will recommend new names to replace them.”

He pointed out that all the parties in Parliament who were members of the National Government , except the UPFA , had pledged their support to him last night and he could easily form a government of his own.

In the current Parliament the UNP led United National Front for Good Governance has 106 seats , UPFA 95 seats , TNA 16 seats , JVP 6 seats and the Muslim Congress and the EPDP one seat each.

Senior UNP sources said that they were confident of obtaining the support of the JVP also. ” Even if the JVP does not join the new government that we will form , they would not support Mahinda Rajapaksa whom they have time and again described as the most corrupt politician.The President waited till Parliament adjourned today, to stage a constitutional coup.”

Finance Minister Mangala Samaraweera said that they they had requested Speaker Karu Jayasuriya to summon an emergency session of Parliament on Monday.

There was no change in the Cabinet of Ministers as of last night . The Constitution precludes the President from dissolving parliament within less than one year of the next General Election , which was due on August 17 , 2020.

Both Finance Minister Mangala Samaraweera and State Minister of National Policies and Economic Affairs Harsha de Silva described President Srisena’s action as illegal and in violation of the 19th Amendment to the Constitution .

Harsha de Silva said that during lunch time in Parliament yesterday , Mahinda Rajapaksa had invited him to join the government that he ( Mahinda ) would be forming, but he had treated it as a joke.”

One thought on “Ranil insists he is still PM”