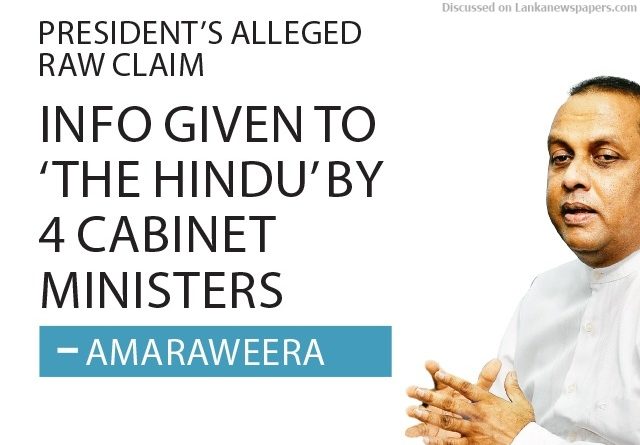 Four Cabinet Ministers had provided information, to the reporter of ‘The Hindu’ newspaper, regarding the statements allegedly made by President Maithripala Sirisena against India and China. They are linked to the Indian RAW intelligence service  and information about them will be made known in the future, said Minister of Agriculture Mahinda Amaraweera.
He made this claim at a function organized to meet the public at Beliatta on Saturday (20).
The Minister added that newspapers recently reported that the President made adverse comments against India and China. “Those are absolutely untrue. The Indian reporter had said that four Ministers gave out the information. We must now investigate this. We already suspect two ministers. I shall confirm my suspicions soon. It is the responsibility of the President and the Prime Minister to clip the wings of such ministers, because speaking about something which was not discussed at the Cabinet is a grave wrong. Besides, having dealings with the media about what is happening in the Cabinet is also a serious offence. Based on information reaching us, these ministers are having links with the RAW informants. We are in receipt of reports about those who are having association with RAW through those reporters. If there are such conspirators, our leaders should chase them away.”
Meanwhile, Hambantota MP Namal Rajapaksa said, if there are members in our Cabinet who are receiving salaries from the Indian intelligence division, the PM and President must reveal that to the country immediately. He made these comments when he attended a function to distribute books yesterday (21) at Ellegala Sri Kshetrarama Vihara Sri Dharmaratne Daham Pasala, Lungamvehera.
Speaking further, he said, if there are members in the Cabinet who are in the pay of the Indian Intelligence division, that is not only an internal issue, but also impacts internationally. “It is therefore, the responsibility of the President and PM to expose them. Recently, the Indian media also reported that President  revealed in Cabinet the RAW had given a contract to a member of the Cabinet to assassinate  him. Mahinda Amaraweera says, there are two members in the Cabinet who are RAW agents. That means there is a connection between Amaraweera‘s statement and the President’s allegation.”