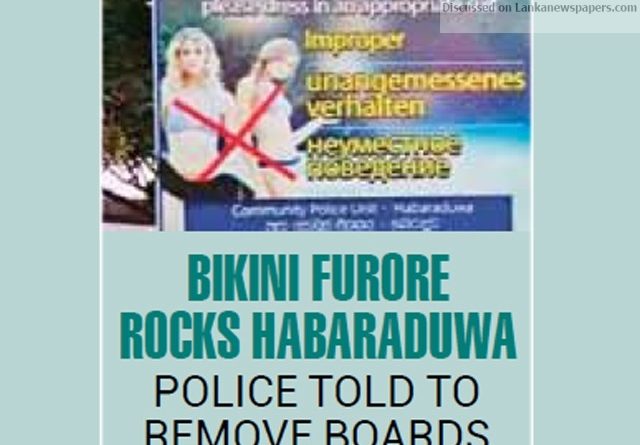 The Habaraduwa Police yesterday said they were forced to place signboards with a message to foreign visitors to dress modestly while in public places, following repeated requests from local groups that included the clergy, schools and villagers.

An official with the Habaraduwa Police said that the move was aimed purely at informing foreign visitors on the local sentiments and culture, and it was not intended to offend any particular person and if that was the case then it is regretted.
He said a large number of foreign visitors, mainly women are known to be scantily dressed in beachwear even when they are moving in crowded public places which causes embarrassment to the local people.
“Beachwear should be confined to that particular area and not elsewhere as it is the case even in many other countries,” he said.
He added that the Police were taken by surprise by the protests over the sign boards from local quarters particular the hotel and entertainment industry and therefore they were compelled to take them down.
The billboards depicted two foreign women clad in bikinis and urged visitors to be more mindful of the local sentiments, culture and values.
Officials with the Tourism Development Authority said that such messages are not good for tourism and therefore they could not be tolerated for whatever reasons and that it was advisable to have them removed as it is the case at the moment.