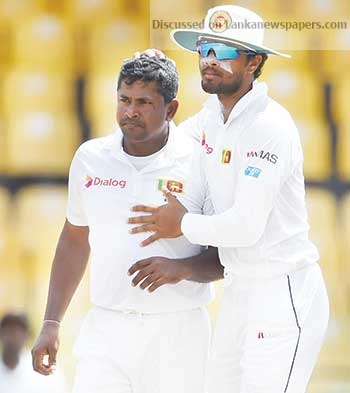 Captain Dinesh Chandimal will have the services of veteran spinner Rangana Herath only for the first Test match against England.

Following on the footsteps of several Sri Lakan cricket greats, veteran Rangana Herath has decided to end his Test career in Galle against England next month. This means that the 40-year-old will only play one Test of the upcoming three match series that gets underway on the 6th of November. Herath, who has undergone multiple surgeries on both his knees, in recent times has been wary to play all three games of a series. He has mostly played only two games in a three match series like in West Indies this year and India last year. Against England too he was expected to play two games but has decided to finish at the iconic Galle International Stadium where the first Test will get underway.

“Herath had made a request to retire after the first Test in Galle. It is entirely up to him and we will respect his decision,” a Sri Lanka Cricket official told The Island.

Herath’s predecessor Muttiah Muralitharan also had done the same thing when he quit Test cricket. Murali, who retired with 800 Test wickets, opted to play only the first Test of a three match series against India also in Galle in 2010.

Herath needs just one more wicket to complete 100 Test wickets in Galle. Only two other bowlers have completed the 100 wicket milestone at a single venue. While Murali achieved the landmark at three venues – Galle (111), Asgiriya (117) and SSC (166), England’s James Anderson achieved the feat at Lord’s recently.

Having already played 92 Tests, Herath was expected to complete 100 Test matches, but he has decided to quit earlier than expected.

His remarkable career will be celebrated by all Sri Lankans though. When Murali was reaching the twilight of his career, Sri Lanka were banking on other spinners like Ajantha Mendis, Malinga Bandara and Suraj Randiv to take over the mantle as the team’s ace spinner. But then captain Kumar Sangakkara took a gamble in 2009 to back Herath, who had gone out of the radar and didn’t have a contract with SLC.

Herath was rushed from England where he was playing league cricket when Murali was injured ahead of a Test match against Pakistan also in Galle. The left-arm spinner landed in Colombo 24 hours before the Test match, drove down to Galle and spun Sri Lanka to a famous Test win against many odds. The rest as they say is history.