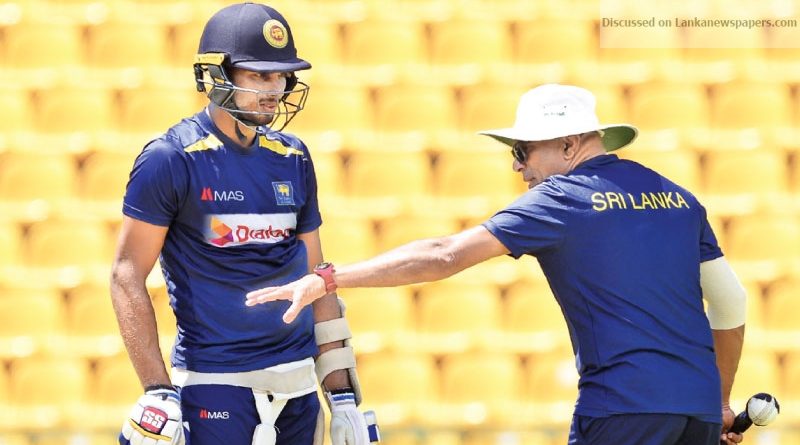 PALLEKELE, Tuesday: Sri Lanka who are trying to sort out their batting woes that has contributed largely to their spate of losses in one-day internationals suffered a setback when one of their top order batters Kusal Perera was ruled out of today’s third ODI against England at the Pallekele International Stadium here.

Team manager Charith Senanayake said that Perera suffered a quadriceps injury to his right thigh during the second ODI at Dambulla on Saturday and has been ruled out of today’s match.

“We are awaiting the MRI scans to see the extent of the injury. We have not taken a final decision yet on whether he will be ruled out of the series,” said Senanayake. But there is a likelihood that Perera will miss the rest of the ODI series.

Perera, an aggressive batsman plays an integral part in a somewhat unstable batting line up that has failed to fire so far. He scored 30 off 37 balls in the second ODI at Dambulla where he suffered the injury.

Sadeera Samarawickrama who is the only other specialist batsman named in the 15-member squad is expected to replace Perera for today’s game.

Meanwhile England also has a casualty with all-rounder Liam Dawson being ruled out of the rest of England’s tour after suffering a side strain. Dawson who played in the first two ODIs sat out training on Monday and after the injury was assessed by the medical staff a decision was taken to send him home.

All-rounder Joe Denly who was recently named Professional Cricketers’ Association (PCA) Player of the Year and was picked for the England Test squad will replace Dawson.

DASUN SHANAKA ON HIS ROLE

Sri Lanka’s fast bowling all-rounder Dasun Shanaka whose position in the batting order at number five has raised many an eyebrows said that he was elevated and asked to bat in that position because of his contributions with the bat in domestic cricket.

“The reason why i have been asked to bat at no. 5 is because i have been pretty consistent in domestic T20 and limited overs cricket,” said Shanaka at the pre-match press briefing. “What they expect from me is to bat as many overs as possible for the longer I wait at the wicket the runs will come. That is the role they expect of me.”

“They expect a long innings from me. They have seen how I batted in the domestic matches and what I can do. Chandika (Hathurusingha) spoke to me and gave advice on how to prepare and how to bat for long periods. Tactics are most important to improve. Those are the things the coach discussed with me. I have been asked to play out the first 15-20 balls and then to go for my shots, it is very simple,” he said.

Shanaka got only one opportunity in the second ODI at Dambulla but he couldn’t contribute much being dismissed for eight off 15 balls in a match that Sri Lanka lost under the D/L rule by 31 runs to trail 0-1 in the five-match series.

“I think I can play the role of batsman at 5 but it all depends on the starts we get. If we get a good start we can continue from there onwards. We have not been able to do that in recent times because we have been unable to get good starts,” said Shanaka.

Shanaka was of the view that no major changes are needed for the struggling team to come out of their rut.