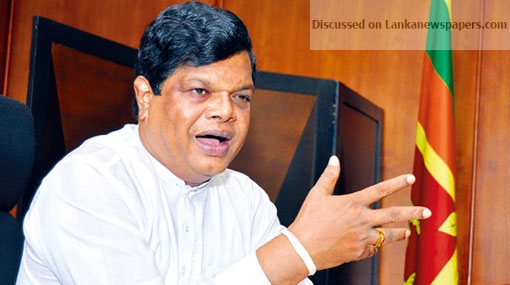 Addressing the media at a temple in Punchi Borella, on Sunday (Oct. 14), Gunawardena displayed half a page advertisement carried in an English daily in its July 29, 2002 edition to back his claim.

Declaring that all governments had slapped taxes on oil imports, Gunawardena, subsequently contradicted his previous statement by alleging that current fuel pricing formula was introduced by the Sirisena- Wickremesinghe administration at the behest of the International Monetary Fund (IMF).

Gunawardena said that the IMF had made an intervention in terms of the agreement that paved the way for Sri Lanka to receive USD 1.5 bn bail-out package in six installments following the 2015 presidential election. Referring to recent claims by the government that pricing formula would be reappraised, Gunawardena insisted that no change was possible without the consent of the IMF.

When The Island pointed out that Gunawardena had made contradictory statements with regard to the pricing formula and whether he couldn’t remember he was a cabinet minister of the then Premier Ranil Wickremesinghe’s short-lived UNF government that introduced the pricing formula published in the media, the Colombo District MP said that the 2002 policy was being implemented.

Gunawardena said that the Rajapaksa administration had never burdened the public by following pricing formula based on international market prices.

Gunawardena pointed out that the Rajapaksa administration had paid USD 105 for a barrel of oil whereas the current price was around USD 80. Responding to media queries, Gunawardena said that as Sri Lanka paid approximately USD 45 per barrel for 2015, 2016 and 2017 there were substantial savings amounting to over USD 5 bn.

The Island sought an explanation from Gunawardena as to how the Rajapaksa administration had made available petrol, diesel and kerosene without adhering to the pricing formula introduced in 2002, Gunawardena claimed that it had been suspended by the then President.

When it was pointed out that the President couldn’t have taken a unilateral decision in respect of taxes as the parliament was solely responsible for financial decisions as quite often emphasised by Gunawardena himself, the MP claimed there was no need to consult Parliament regarding the suspension of a pricing formula.

The issue was raised after Gunawardena claimed that the Rajapaksa government hadn’t acted on Supreme Court directive issued in late 2008 as regards a pricing formula as the parliament was solely responsible for such matters.

The Supreme Court directed Treasury Secretary to formulate a formula to regulate fuel prices in line with the oil prices in the world market. The directive followed two petitions filed against the then Ceylon Petroleum Corporation (CPC) Chairman former national cricketer Ashantha de Mel over the signing of controversial hedging agreements with two private banks that finally cost the country dearly.

Asked whether the Joint Opposition had a proper plan to manage the economy, Gunawardena said that they were ready to take up the challenge. The MP said that they had an experienced team capable of addressing economic issues and unlike those enjoying power today the former President’s team proved its capabilities during a very difficult period when the country was fighting a costly war.

Gunawardena said that the media recently quoted some three wheeler drivers as having wished that the parliament might collapse along with its 225 members. Gunwardena was the second lawmaker to make reference to parliament in this regard. Last week, MP Dayasiri Jayasekera said that the people cursed the entire parliament over extremely difficult economic conditions experienced by them in the wake of the steep depreciation of the Rupee and hike in petrol and diesel prices. The media covering the JO briefing said that they, too, felt the same way.

Gunawardena found it difficult to explain how he could stabilise local oil market prices amidst increase in global prices. Asked whether the JO and Gunawardena as the future Finance Minister of a new government had calculated at what rate a litre of petrol could be sold now, Gunawardena admitted they hadn’t worked that out.

Gunawardena faced a barrage of questions regarding the failure on the part of the Rajapaksa administration to rein in the then Sri Lankan Airlines Chairman Nishantha Wickramasinghe, brother-in-law of the President. Gunawardena was asked whether those aspiring to return to power could guarantee the likes of Nishantha Wickramasinghe wouldn’t engage in such abuse again.