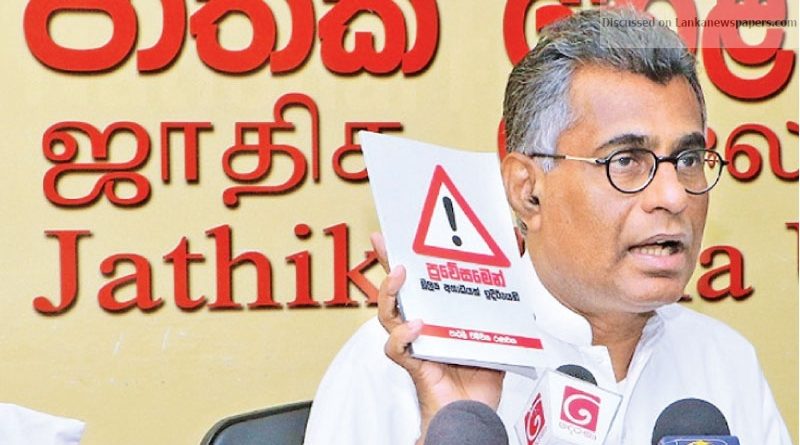 Megalopolis and Western Development Minister Patali Champika Ranawaka said the depreciation of the rupee to the dollar is nothing new since the Rupee value has been depreciating generally by 7% annually even during the Rajapaksa regime.

Addressing the media at the Jathika Hela Urumaya (JHU) headquarters at Battaramulla yesterday, he said the depreciation of the rupee against the US dollar is temporary.

“It is significant that the value of many world currencies have depreciated, when compared with the dollar rate” Minister Ranawaka said.

Ranawaka said that before the so called economic experts of the Joint Opposition, who made a big hue and cry, he predicted in 2015 in his booklet that there would be an economic crisis in 2018, 2019 and 2020.

“Due to the world economic crisis, the value of a number of many world currencies, including that of India, Sweden, Pakistan, Australia, the Philippines, Turkey, Indonesia and many countries have depreciated when compared with dollar rate,” he said.

During the Rajapaksa Regime, the Rupee value couldn’t be protected from depreciation even by pumping US$ 4.2 billion. But some from the JO are now boasting that the Rupee value can be stabilised under their government.

“Considering the world economic downturn, it is inevitable to contain the depreciation of world currencies.Ours are not an exception.The increase in US interest rates is the reason for this world economic crisis, he added.

He added that the JHU has suggested several measures to mitigate the rupee depreciation and strengthen the economy. It can be sorted out by implementing long lasting solutions. It is important to reduce trade deficit and the balance of payment, he said.

The JHU suggests it is better to invite Sri Lankan expatriates to invest in the country. “This is only an issue of US$ 2 billion.There are around 2 million Sri Lankans abroad and if one person invests US$ 100 each the issue is over,” he said.

The Minister said the Rajapaksa regime took short term loans for high interest rates and invested in useless projects, which were not economically viable.

“Funds obtained from loans by the Rajapaksa government was invested in the harbour, airport, convention centre and many more, which are not economically profitable. The present government has to pay back those loans now and a huge amount of state revenue has to be utilised for it” the Minister said.