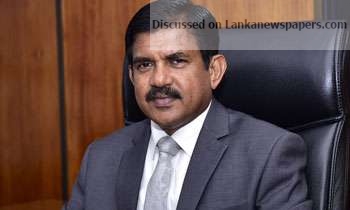 Responding to a statement made by Colombo Mayor Rosy Senanayake that SLLRDC is taking extortion for garbage management, SLLRDC Chairman Roshan Gunawardena said that the service provide by SLLRDC is not a public charity.

According to Mr. Gunawardena, CMC has agreed to pay Rs. 3,000 for a metric tonne of segregated garbage and has a total outstanding of Rs.207 million for 15 months starting from May, 2017.

After the Meethotamulla Garbage Dump collapsed in April 14 losing 32 lives, the SLLRDC undertook the task to find a long standing solution to garbage management under the instructions given by President Maithripala Sirisena to Megapolis Minister Champika Ranawaka.

SLLRDC recycled and made compost from the garbage collected and handover by the CMC at Kerawalapitiya dumping yard.

“SLLRDC is not a dansala to give its service free of charge. Garbage management cost lot of money as we have to pay for officers and the machines used for the task. CMC is an institution that receives around Rs. 2 billion income per annum. Both the parties agreed to the said amount and we never over charged them,” he added.

Mr. Gunawardena said that they had reminded of the outstanding amount several times but the CMC authorities had not responded.

In a letter sent by the SLLRDC on October 1st it had made the final warning however following that Megapolis Ministry on October 4 had also instructed the CMC to make the payment.

Colombo Mayor Rosy Senanayake in a press briefing held recently, said that SLLRDC had violated the agreement and increased the charge for one metric tonne of garbage and the SLLRDC is using machines belonging to CMC in garbage management.

However, Mr. Gunawardena assured that SLLRDC never increased the charges and the resources that they used are owned by SLLRDC.

He further said that CMC authorities can reverse the SLLRDC decision if they agree to pay 50 percent of the outstanding amount.

“During the crisis situation we interfered garbage issue and controlled the situation. It is neither what SLLRDC does usually nor our responsibility. We provided CMC a service. They have to pay it as agreed. Why can’t CMC manage their own waste,” he added.

Colombo was severely hit with health issues including dengue epidemic situation due to piling Garbage Mountains after the Meethotamulla garbage dump collapsed.

Upon the request of the President, Megapolis Minister Champika Ranawaka and the SLLRDC officials were able to control the situation after an joint effort with the security services.

In a middle of an adverse weather situation, the SLLRDC’s decision to not to accept Colombo Garbage fears of reawakening the dengue and other severe health issues if the CMC fails to address the issue in a positive manner.

SLLRDC currently undertaking garbage belong to 15 Provincial Council’s and learned having a very flexible decisions with the provincial councils that do not have sufficient money to pay their waste.