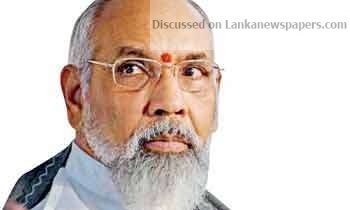 Northern Province Chief Minister C.V. Wigneswaran’s request for approval to import a super luxury vehicle at a cost of US$ 60,000 (Rs. 102,00,000 approximately) had been rejected by the Cabinet on Tuesday (02) Cabinet Spokesman Dr Rajitha Senaratne said yesterday.

He told the media at yesterday’s Cabinet news briefing that the Government could not afford the extra luxury to Wigneswaran while suspending vehicle imports for Ministers, MPs and public servants who were entitled to tax-free vehicle imports.

“The Government would relax restrictions on vehicle imports after six months and I believe the situation would be improved by December with the drop of fuel prices in the global market and the rupee becoming steady against the dollar,” Minister Senaratne said.

He added that the prices of essential commodities were still lower than the process before 2015 and added the budget 2019 would be a relief budget giving people a lot of benefits.

Minister Senaratne flatly rejected the notion that the Cost of Living and prices of essential commodities were much higher than the prices in 2014 and also that a large majority of people were struggling to make ends meet under the prevailing economic situation in the country.

Responding to a journalist’s suggestion that the Police had failed to contain the underworld and crime wave in the North and as such the Sri Lanka Army had appealed the Government to give armed forces personnel to control crimes in the north, Minister Senaratne said the Army had helped the Police to control public unrest and crimes right throughout since Independence.

“But the Sri Lanka Army under this Government will not kill people when they stage protests like the Rajapaksa Government did at Rathupaswala and Katunayake,” he stressed.