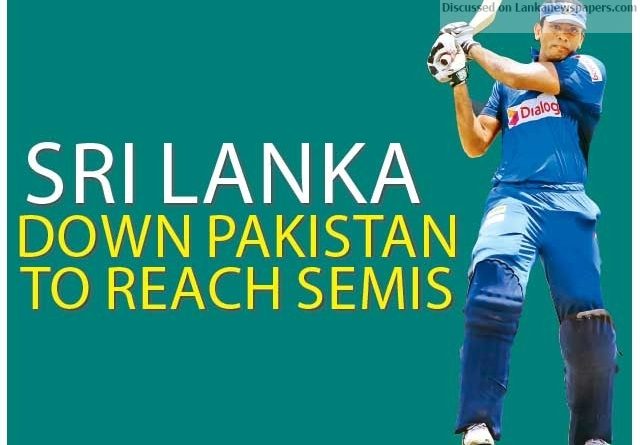 The Sri Lanka under-19 team continued their winning streak defeating the Pakistan under-19 team by 23 runs in their Asia Cup match in Chittagong, Bangladesh yesterday.
Sri Lanka will now face defending champions Afghanistan in the semi-final scheduled to be played on 4 October. The other semi-final will see India take on Bangladesh.
Winning the toss Pakistan chose to bowl first. Sri Lankan openers built a strong partnership for the first wicket, scoring 63 runs. Navod Paranavithana scored 27 runs and Nishan Madushanka made 19.
Kalana Perera played a brilliant knock for Sri Lanka with a speedy 51 runs off 61 balls. He stroked four fours and three sixes in his belligerent innings.
Captain Nipun Dananjaya also produced a very important innings for his team in the middle order, making 33 runs off 50 balls with three fours and one six.
Nipun Malinga anchored the team in the latter stages with a very responsible innings, scoring 23 off 41 balls. He hit two massive sixes and helped Sri Lanka to get 200 runs.
Pakistan’s best bowler was Arshad Iqbal. The fast bowler picked up 6 wickets for 34 runs. He took the key wicket of Kalana Perera who scored the most runs for Sri Lanka.
Bilal Javid the off spin bowler also bowled a good spell taking 2 wickets for 25 runs inclusive of two maiden overs.
Pakistan’s start was poor. They lost opener Saim Ayub for just 2 runs through a run out, and then lost Saad Khan and J. Sultan for identical scores of 22 runs.
Pakistan got back into the game through Awaiz Zafar, who made 43 runs off 72 balls with a four and a six, while Arshad Iqbal, who did well with the ball, was unbeaten on 26 runs. However, they lost the match by 23 runs.
Kalhara Senarathne, Navod Paranavithana and Dulith Wellage took two wickets each for Sri Lanka playing important roles.
Sri Lanka beat Bangladesh and Hong Kong in their previous games.
Chief Scores