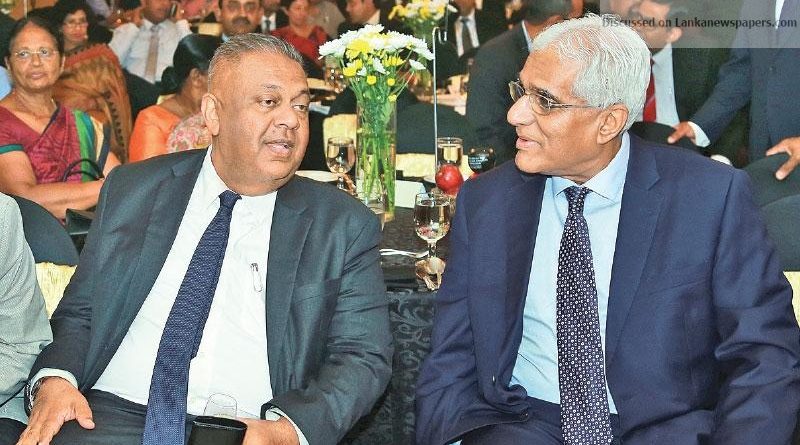 Speaking to the Sunday Observer, Senior Professor in Economics, University of Colombo, Dr. Sirimal Abeyratne said as Sri Lanka’s ‘weak Rupee’ is not Central Bank’s responsibility but a consequence of sluggish exports and poor foreign direct investment (FDI) inflows over the years, the country’s Monetary Authority now has a ‘limited role to play’ and should not cross boundaries.

“What the Central Bank is doing right now is correct. They can intervene to avoid major fluctuations thereby mitigating uncertainty but they should not go beyond this as it will put the country into greater financial trouble,” Abeyratne noted.

With the Sri Lankan Rupee which hit a record low against the US Dollar in recent weeks showing signs of volatility during the past few weeks, senior officials of the Central Bank of Sri Lanka (CBSL) have in recent times indicated that they do not wish to artificially prop up the domestic currency to a level beyond its market value.

Addressing recent events, Governor of the Central Bank of Sri Lanka Dr. Indrajit Coomaraswamy explained two ‘bitter lessons’ learnt from the past as a result of aggressively defending the currency.

Highlighting that in contrast, the Bank had so far managed to preserve reserves at an elevated level at around US$ 8 billion, he noted that spending large amounts of Sri Lanka’s reserves to defend a particular rate is unfeasible because the country would be hit with a ‘double whammy’ of highly depleted reserves and a depreciated currency.

On Thursday, the Sri Lankan rupee fell to an all-time low of 169.40 against the dollar. The currency has weakened by 4.8% so far this month after a 1.2% drop in July and has declined by around 10% so far this year, say market sources. The Central Bank in its Weekly Economic Indicators released on Friday quoted Rs. 166.98 as the buying rate and Rs. 170.86 as the selling rate.

The Central Bank which commenced intervention from April this year, after keeping the currency afloat for some time, has so far spent around US$ 400 million in defense of the Rupee, say officials. According to latest statistics released, the regulator had spent around US$ 24 million in August 2018 in defense of the currency while US$ 7.5 million was spent for the same purpose in July 2018. The Central Bank’s total Official Reserve Assets as at 31st August 2018 stood at US$ 8.58 billion.

Meanwhile, Chief Economist of the Ceylon Chamber of Commerce, Shiran Fernando also opined that Central Bank should limit its interventions to defend the rupee in particular to instances when there are sharp movements.

“This year has shown that countries like India and Indonesia which have used significant levels of resources have not been able to defend the currency. Therefore, we have to be mindful of the debt refinancing challenges that will be there in 2019,” Fernando said.

“This year records the highest debt repayment since independence: approximately Rs. 1.9 trillion – nearly 82% from the pre-2015 era. Therefore, it is clear that the Government needs to undertake more difficult and challenging reforms in order to drive future economic growth and development,” Minister of Finance and Mass Media, Mangala Samaraweera told a recent forum. Attending a special briefing held at the Royal College with the participation of students on Thursday, he also pointed towards the silver lining in the dark cloud.

“In a way this is a good point for us to expedite the programme to make Sri Lanka an export-oriented economy. We should somehow manage savings and prevent spending on unnecessary things. MPs, Ministers should stop importing fancy cars,” the Minister noted. 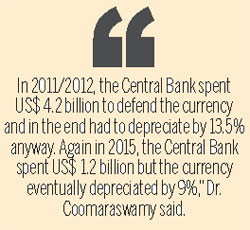 Meanwhile, State Minister of National Policies and Economic Affairs, Dr Harsha de Silva said that the Central Bank must be credited for being responsible and not burning reserves to defend the Rupee at levels earlier not feasible.

Expressing his personal view on social media, he said the Central Bank could maintain the Sri Lankan Rupee at a level adjusted slightly upwards to correct the overshooting. “We saw how during the 2011-12 home made crisis (having held the currency artificially at 110 levels for months) ended up; losing almost USD 4 billion or close to half of the reserves in just a few months and yet the rupee depreciating by close to 13 percent,” the State Minister pointed out.

However, he elaborated that the Central Bank should not sterilize the interventions whereby the loss of a rupee in the market to purchase USD sold by the CBSL – should not be replaced with a new Rupee by the CBSL.

“Unsterilised defense will lead to some tightening of rates but that is an okay price to pay for a short while to stabilise the markets and build confidence around the new equilibrium exchange rate,” he said. Speaking on the issue at an event in Kurunegala on Wednesday, Prime Minister Ranil Wickremesinghe said Sri Lanka would have been in a better position to wade through the challenges, created mainly due to unfavorable external market conditions, if the country did not get into a debt trap in the first place. “This is not an economic crisis created by us but it affects us as well. This year US$ 3 billion has to be paid to settle the debts and next year US$ 4 billion has to be paid. We have inherited this debt form the past and now we have to overcome this situation,” the Premier explained. On the other hand, former Deputy Governor of the Central Bank of Sri Lanka, W.A. Wijewardena who expressed his views in a daily newspaper last week, said Sri Lanka is in critical situation whereby it could spend a massive amount from its reserves which have been built basically out of borrowed money to protect the rupee.

“But it would then have to default its foreign loan servicing commitments and still allow a free fall in the value of the rupee when it does not have any more foreign reserves to defend the currency. Either way, Sri Lanka is to suffer for failing to address the critical external sector issues in the past,” he said. He noted that while in the next 12-month period, the repayment of debt and payment of interest on such debt will be about $ 6.2 billion; as against these commitments, the free foreign reserves available have been only $ 7.7 billion.

“If Sri Lanka is to use its foreign reserves to defend the rupee, it has a space of only $ 1.5 billion. This has reduced the Central Bank to making a critical choice: what would happen to the Sri Lanka Rupee after it has spent the freely available reserve of $ 1.5 billion?” he queried in his analysis titled “The fate of the rupee: Central Bank is caught with ‘Devil’s Alternative’.

Wijewardena, a career Central Banker who served the country for nine-years until 2009, said that there has been pressure for Sri Lanka rupee to depreciate because during the period from 2012 to 2017, Sri Lanka’s current account deficit has been on average at 3% of GDP a year.

“What the previous administration did was to borrow abroad and use the proceeds to release the pressure in the market. It is like giving some pain killer to a cancer patient to relieve of his pain. It is not a cure. Hence, the wound begins to fester within the body without proper medication. One day, when the cancer becomes acute and it is too late to administer any medication, the patient would succumb to his illness,” he explained. He however noted that while this was known at the time when the new Government took power in January 2015, the Central Bank’s Monetary Board as well as the Minister of Finance had then behaved as if there was no economic crisis.

“The Central Bank Annual Report for 2014, released in April 2015 under the stewardship of the new Government, talked complacently about the stability of the rupee during 2014. That was against the US Dollar. It had been more complacent when it had reported that the rupee has appreciated on average against the currencies of its major trading partners during 2014,” he added.