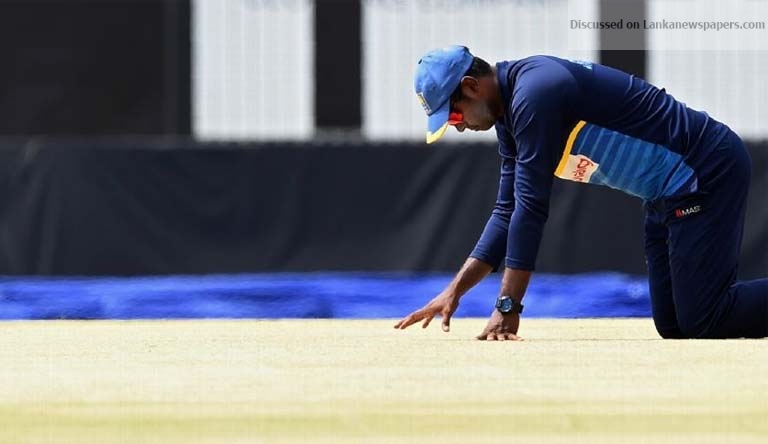 Poor running between the wickets, and a particular propensity to run his partners out is among the main reasons Angelo Mathews has been left out of Sri Lanka’s ODI squad. Sri Lanka chief selector Graeme Labrooy told ESPN cricinfo that Mathews had been “sluggish” between the wickets during the Asia Cup, but coach Chandika Hathurusingha went further, detailing the number of times he felt Mathews had been involved in run-out dismissals. He also said that Mathews had a tendency not just to participate in run-outs, but to particularly run the opposite batsman out.

While both Labrooy and Hathurusingha have suggested that Mathews lacks the match fitness to field for 50 overs and then perform as a batsman, that Hathurusingha used the phrase “team dynamics” in describing Mathews’ shortcomings is especially telling. Essentially, the team management is suggesting that Mathews’ teammates have begun viewing him as a liability when it comes to running between the wickets.

“Running between the wickets is a very big concern for us at the moment – for the whole team, not only for [Mathews],” Hathurusingha said. “We want him to get fitter. His average since 2017 is 59 – I know that. And he scored 97 runs against South Africa three matches ago. But there are certain concerns. If you look at his record, he has been involved in about 64 run outs, and 49 times the opposite guy got run out. That’s a world record. Those are the things that we’ve been looking at. But I want him back as fresh as possible, and clear as possible, to serve the Sri Lankan team.”

Mathews had reminded SLC in a letter to the CEO that he had in fact been the highest scorer in the recent five-match one-day series against South Africa, but Labrooy suggested those performance were not necessarily meaningful, given they had come in a series defeat. That he made other batsmen in the team uncomfortable, is also something Labrooy suggested.

“Unfortunately, we lost to South Africa – although [Mathews is] the highest scorer, we ended up on the losing side,” Labrooy said. “We would have expected someone who scored the highest runs to be on the winning team. With Angelo, we knew that he had a hamstring injury right throughout and he’s been nursing and treating it. We saw that he had slowed down in the game, and his cricket fitness was not up to the mark. He had the challenge of him taking quick singles and running twos. Also he transferred pressure on to the rest of the batters.”

One of the selectors’ key problems with Mathews was that in their view, he was especially slow between the wickets when his team was batting second, as they did in both matches at the Asia Cup. “We weren’t convinced that Mathews was able to field for 50 overs and then come and bat for 30 overs, and do both those things well, based on his fitness,” Labrooy told ESPNcricinfo. “So we decided to ask him to step down and focus on his fitness, without the added pressure of captaincy.”

Upon hearing that the selectors wished to drop him, Mathews is also understood to have demanded a test to prove his fitness. But the outcome of such a test would be besides the point, Labrooy suggested.

“The issue isn’t that he has failed a yo-yo or a skinfold test,” he said. “Our concerns were about the players’ ability to perform their jobs on the field. In the Asia Cup, we thought he was sluggish between the wickets.”

Labrooy also said that Mathews had not undertaken a yo-yo test before the Asia Cup because he had had a note from a doctor that stated a fitness test could put him at risk of further injury. According to Labrooy, Mathews had travelled to Australia for treatment on his hamstring, as well as some injections, four days prior to the Asia Cup. This recent treatment made it inadvisable for him to undergo a yo-yo test, even though the selectors would have preferred him to take one at the time. Aside from Mathews, Lasith Malinga, Thisara Perera and Suranga Lakmal were also exempted from a pre-Asia Cup yo-yo test, in order to minimise the risk of injury to those players.

The ODI series against England begins on October 10, in Dambulla.