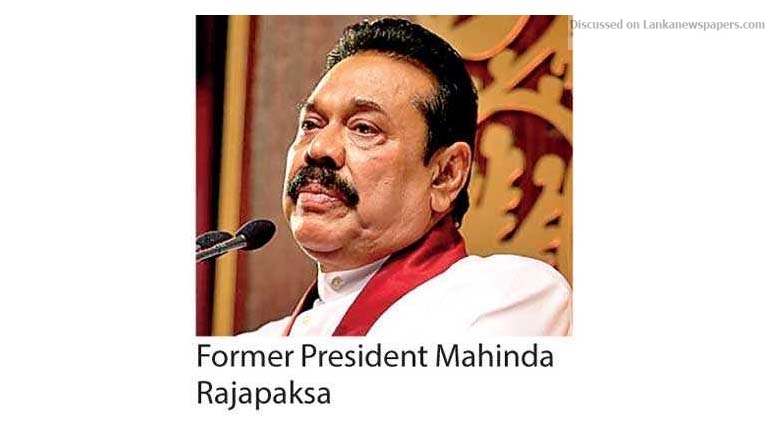 In a statement released to the media, Rajapaksa called into question the role played by the current government, while admiring the policies followed by the Trump administration. “The role of a government is to keep abreast of worldwide developments and to take steps to strengthen our economy instead of complaining that a foreign leader has strengthened his own economy and that our currency was collapsing on account of that,” he said. “This government in contrast believes in limitless liberalisation and free trade without a clear strategy to increase exports and reduce imports.”

Pointing out that President Trump had strengthened the US economy through a policy of giving incentives to indigenous businesses and imposing tariffs on imports to encourage local production, Rajapaksa drew parallels with his own government, which followed “a policy encouraging local production” reducing imports, particularly of foodstuffs such as diary products, maize, soya, sugar, onion, potato, fruits, vegetables, poultry and certain industrial products.

He claimed that the country’s economy was able to weather the 2008 economic crisis, saying that “very few Sri Lankans were even aware that there was a global economic crisis from 2007-2008.”

Noting that his government was able to take the steps needed to address the situation even during the civil war, he stated: “A government’s task is to manage crises, not to complain about them.”

“It took some quick thinking to keep out of the crisis that was sweeping the world in 2008,” the statement said.

The ex-president also found fault with the current administration’s decisions to increase salaries which he called reckless, fuel price reduction and tax reductions which had led “to widening trade and fiscal deficits and heavy borrowing to meet the shortfall.”

“My government was very careful in taking foreign currency commercial loans because even a slight increase in the exchange rate results in the debt burden going up due to the exchange rate difference. For example, my government issued Sri Lanka Development Bonds only twice a year and that too for amounts that averaged less than $ 350 million per year,” he said, finding fault with the borrowing trend of the current administration.

“The volume of foreign currency loans taken has to be carefully controlled to ensure that the economy is not overwhelmed by repayment commitments. However, the present government has been completely reckless in its foreign commercial borrowings. From January 2015 to date, the total volume of foreign currency loans taken by the present government amounts to an unbelievable $ 20.7 billion, the breakdown of which is as follows – $ 8.2 billion through the issue of Sri Lanka Development Bonds from January 2015 to date, $ 6.1 billion through sovereign bonds issued in 2015, 2017 and 2018, $ 2.2 billion through currency swap arrangements with India in 2015 and 2016, $ 2.7 billion through syndicated loans arranged through international banks in 2016, 2017 and 2018 and $ 1.5 billion from the IMF Extended Fund Facility in 2016,” Rajapaksa said in the statement.

Rajapaksa also asserted that “the rapid depreciation of the rupee is depriving us of the benefit of declining international prices of commodities. Fuel prices were increased thrice this year.”