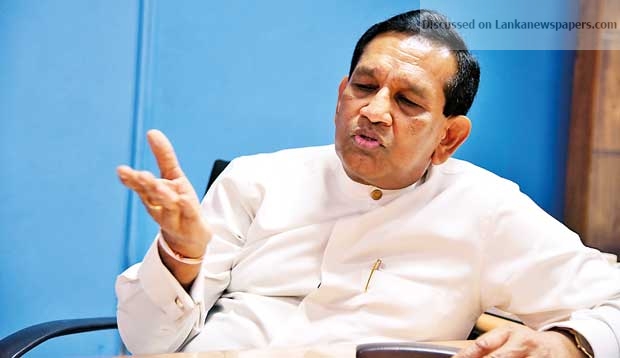 The arrested Police informer Nalaka Kumara has contradicted the statement he made on the alleged threats on the lives of President Maithripala Sirisena and former Defence Secretary Gotabaya Rajapaksa and as such, the CID inquiry on the issue had taken a different turn, Cabinet Spokesman Dr Rajitha Senaratne said yesterday.

The media last week gave wide publicity to a press conference held by Nalaka Kumara in which he came up with a shocking exposure that there was an attempt on the lives of President Sirisena and Gotabaya Rajapaksa instigated by Director, Terrorist Investigation Division, (TID) Deputy Inspector General Nalaka Silva.

Responding to the media at yesterday’s weekly Cabinet news briefing, Minister Senaratne said there were so many contradictions and fabrications in the statement made by Nalaka Kumara and nevertheless the CID would continue to investigate the allegations and find the truth.

“The allegations made by this man are extremely sensitive and alarming and the CID will go to the bottom of the statement he made before the media,” he said.

“If his allegations were fabrications, he would be in deep trouble. If the allegations of conspiracy to harm President Sirisena and Gota were true, then DIG Nalaka Silva will also be dealt with strict legal actions against him. However, we will have to wait until the CID inquiry is over,” Minister Senaratne said.

Minister Senaratne added that the Cabinet did not discuss the issue as the CID was in the process of investigation on the threat and added the inquiries revealed that he had made this allegation as a tit-for-tat because the Police had allegedly failed to pay him for some information provided to the Police by him.

“Whether the allegations were truthful or not, there must be a thorough investigation on them because the threats to lives were of the President and former Defence Secretary,” he said.

“He has been paid Rs. 500,000 by the TID but he is not satisfied and demanded more. We have information that it was this man who has provided information to the Police on the communal clashes that took place at Digana in Kandy, last March,” Minister Senaratne said.

The CID has recorded two statements from him so far,” he said.

Responding to a journalist as to why DIG Silva had not been arrested up to now, Minister Senaratne said a Senior Police Officer could not be arrested without hard evidence but if there were a prima-facie case against him, he would be definitely arrested and charges would be filed against him.

Minister Senaratne said the Police would provide security to Nalaka if his life was actually under threat as claimed by him.

Answering a query raised by another journalist on the controversy involving Chief of Defence Staff (CDS) Admiral Ravindra Wijegunaratne, Minister Senaratne said President Sirisena was not happy on the attempt to arrest the CDS.

“The CID has every right to arrest Admiral Wijegunaratne if the CID had clear evidence against him. But President has to be informed in advance of any action against CDS because he is the Supreme Commander of the Armed Forces, Defence Minister and then the Executive President,” Minister Senaratne said

He added that the President had no problem with the arrest of any armed forces or Police personnel with provable evidence.