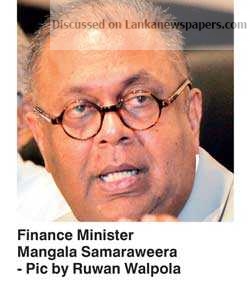 Government this week approved the Appropriation Bill proposed by Finance Minister Mangala Samaraweera, to be presented in Parliament during the second week of October, Cabinet Co-spokesperson Gayantha Karunathilaka said yesterday.

A further Rs. 2,088 billion has allocated for public expenditure, to cover expenses authorised by special laws, to be charged on the Consolidated Fund such as Public Debt servicing.

Another Rs. 6 billion has been estimated for Advance Account Activities, included in the third schedule of the Bill.

According to the Appropriation Bill amendments, the Government revenue under prevailing tax rates structure and foreign grants has been estimated to be around Rs. 2,432 billion. The total borrowing requirement from both foreign and domestic resources is estimated at Rs. 1,944 billion.