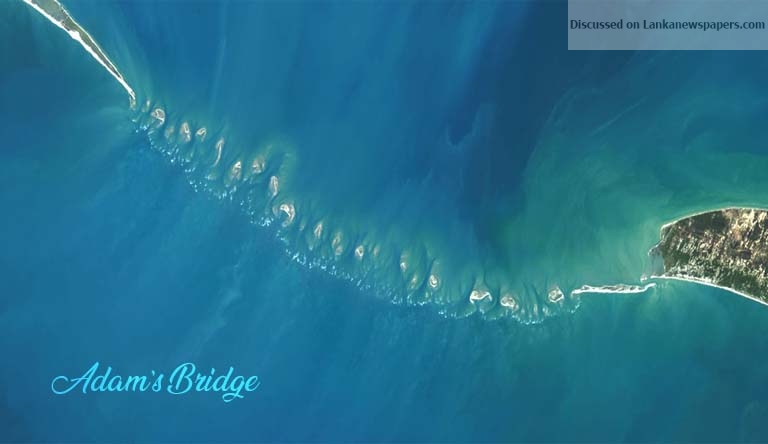 The legendary Adam’s Bridge or Rama’s Bridge that’s made up of 16 sandy islets, stretched like a string of pearls, located between the Gulf of Mannar to the West and the Palk Straits to the East appears to be true to the legendary epic bridge narrated in the Ramayana dating back to some 1.5 million BC. However, Sri Lankans and Indians want that sacred Bridge to remain as it is, untouched in its pristine natural landscape despite it having a remarkable demand for economic and tourism potential that lies in the Ramayana Trail tourism.

Ceylon Today visited the unscathed land mass by the blue sea, where Adam’s Bridge begins, which is, in fact, the best ‘natural international connectivity’ to reach India and countries that are closer to India if the channel is dredged, but that concept was thwarted when several Indian Hindu religious groups  who hold the Adam’s Bridge in reverence denounced the Indian government’s attempt to dredge the bridge to create a shipping canal, known as Sethusamudram  (Sea Bridge)  because of the sacred Ramayana Trail.
Sri Lanka too reveres the Adam’s Bridge and the Sri Lankan Government also, at the same time, has been highly protective of the area for security reasons for a long time.

Sri Lanka was never pleased to taint the place with commercial activity by supporting a shipping channel as it also can have a severe environmental impact on both countries.

Sri Lanka’s lucrative transshipment industry can also suffer if Indian vessels are able to navigate around the sub-continent without going around Sri Lanka.
Desert-like beach
The desert-like beach of Adam’s Bridge could be reached passing Erukkalampity and Urumalai coastal area of Thalaimannar.
It is said of the 16 islands between the two countries, eight of them belong to Sri Lanka and the rest to the Indian Government.
It’s a highly protected area and hardly anyone gets close to those islands. Even the fishermen kept out of bounds while fishing. The Navy guard in Urumalai says no civilians can visit the eight islands that belong to Sri Lanka unless the Ministry of Defence issues permits or passes. This sand bridge provides a natural habitat for migrant birds that strikes a perfect ecological balance and the Navy offers a boat service from the Thalaimannar pier to wander around these five to six scenic sand dunes on the Sri Lankan side but that is available only to  VIPs and their families as of now.
Smuggling
The Navy guard added that the sea route is used for smuggling Kerala Ganja and gold to the country from India and they are on high alert by being stationed at the small Navy bases on the eight sandbanks.
The fishermen seated with their nets say the best route to see Adam’s Bridge is by visiting the Vayu Resort, a five-acre property but with a 100-acre block that is dedicated for conservation owned by a top businessman A. Y. S. Gnanam’s family. The Resort faces several sandbanks of the Adam’s Bridge that could be seen from the first floor.
Kitesurfing
Dilsiri Welikala who runs the Kitesurfing, a joint venture with the Vayu Resort, says he is sad about sea garbage that is collecting on the beach.

“Plastic garbage could be seen all over despite there being no tourism,” he notes. He says 90% of the garbage comes from India and all of it is plastic material.

“The islands are all dotted with tons of plastic bottles and by-products of fishing and fishing nets. Most marine animals are already adversely affected by this and dead turtles can be seen almost every day on the beach.”
According to him some of the sea banks (of the Adam’s Bridge) is for birding. Plenty of migratory birds nest on these islands and some are conserved as bird sanctuaries but no one can visit them.
Welikala adds that the Adam’s Bridge is  nature’s gift. “Two years ago, the first island of Adam’s Bridge was connected to the mainland and made it a complete eight-mile stretch of the bare sandy island.

Now the first island starts about 2 km and in between is the water channel. This is due to the movement of sand.”
He is also of the view that the place should be untouched. “We bring small groups of tourists for kitesurfing and it is only a limited number because we don’t want a crowd here.”
Sustainable Tourism
Sustainable Tourism is a way forward for the area, he adds. “It can bring about much needed economic and social uplift especially to an area torn by war. Eco-based tourism – using non-mechanized boats to show Adam’s Bridge, Birding Tours, Kayaking and Paddle Boarding are good avenues to develop,” he notes.
The Bridge of  Rama
Based on the Epic Ramayana the Hindu belief is that the bridge was created by Rama and his brother Lakshmana with the assistance of Lord Hanuman and the ape army to reach Lanka to find Rama’s wife Sita who was taken captive by Ravana.
The Adam’s Bridge is supposed to have been built on numerous rectangular limestone shoals.  While some of the Indian geologists argue it is a natural phenomenon, some have challenged it to be man-made.
Former Director of the Geological Survey of India and Ex-coordinator of the survey division of the National Institute of Ocean Technology, Ministry of Earth Science in Chennai,
Dr. Badrinarayanan said in an interview to the Indian Media in 2007  that they found Adam’s Bridge to be very sensitive.

All around the North, there are spots where there is a very high temperature below, he said. “When we drilled, he added, that they found hot springs of 60 to 70 degrees Celsius.”
He was one of the geologists in India who said that it was not a natural phenomenon but a man-made structure.
He said “Whenever there are earthquakes in Sri Lanka, we get vibrations on the Indian side also. That means a major fault is running there and it is very sensitive. This area is also known to have earthquakes and they had happened one or two centuries ago. To the north and the south, there are indications of old volcanoes,” he had revealed.
The bridge is situated on a stretch of shallow sea water where the depth ranges from 1 m to 10 m that varies according to high and low tides of the day. The length of this sand dune mounted bridge is 30 miles or 48 Km from Sri Lanka to India.
Changed Topography
This sea passage is quite prone to natural disasters especially whirlwind storms and cyclones that had changed its topography to be what it is today over many centuries.

Until 1480 AD, this bridge route was passable by foot. The cyclone that swept the area in the same year, submerged it by sea, intermittently restricting a journey by foot, he noted.
The argument still goes on to determine whether this bridge was man-made or natural. Based on a recent Satellite photo, it was speculated by Scientists of NASA to be at least partly man-made.
Dr Badrinarayanan said that Adam’s bridge is not a natural formation because the top portion of it appears to be a man-made structure.
He says that Adam’s Bridge was originally a natural grade divide separating the Bay of Bengal and the Indian Ocean to the south. So, geological aspects are different on either side.
Around 7,300 years back, there was major flooding and the sea level rose to four metres more than what it is today.

This has been verified by several researchers throughout the world. But the bridge that connects India and Sri Lanka is different; it is not just a sand dune.

He said that they were asked to carry out surveys to locate the Sethu- samudram Canal project in 2004-2005 and when they reached close to the Adam’s Bridge, there was a sudden rise in the land level. From about 10-12 metre, it rose one metre to half a metre.
The boulders are not a marine local formation he noted. “We feel somebody dumped the boulders to use it as a causeway. The boulders on top of the loose sand are transported to that place. As they are found above the loose sand, it is quite obvious that they were brought and dumped there by somebody.”
Old corals
In Rameswaram, Pamban, Tuticorin, area the geologist and his team saw old corals on the land, and they are not raised by any geological process. “It happened because the sea level was higher (at the time they were formed). We did dating on them and found that they are 7,300- years-old.”
From 7,300 to 5,800 years ago, the sea level was high.

From 5,800 to 5,400 years ago, the sea level was low. Again, from 5,400 to 4,000, the sea level was higher by 2 metres than what it is today. That is why we  get two sets of corals at two levels.
So, either between 5,800 to 5,400 years ago, or (some time since) 4,000 years ago, somebody appeared to have brought all the boulders and dumped them there. All the aerial pictures show that Adam’s Bridge is two to three kilometres wide. On the eastern side, it is high. So, anyone could take advantage of the raised portion and must have dumped these boulders so that he could cross the bridge.”

Another myth suggests that the earliest map that calls this area as Adam’s Bridge was prepared by a British cartographer in 1804, in reference to an Abrahamic myth, in which Adam used the bridge to reach a mountain, which the British identified with Adam’s Peak in Hatton.
Connecting to the presence of Adam, there is an ancient burial site about 2 km from Adam’s Bridge, where a 40 feet tall man supposedly Adam himself is buried. The burial site is covered with a shiny green satin cloth.

It is now a protected area and people living around there believe that a mysterious power cures incurable diseases when visiting the burial site or bathing in the well in the vicinity.

Muslims who maintain the burial site hold spiritual rituals to  ‘Adham’ and have barred visitors from taking photographs of the burial site warning of serious health conditions, probably death, as a result.