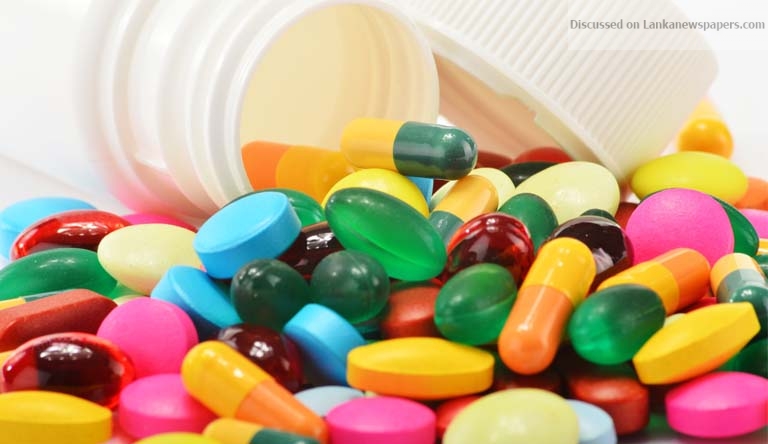 Sri Lanka’s pharmaceutical firms, hit by rising costs from currency deprecation are calling for controlled prices to be hiked every six months to reflect the falling rupee, with the smaller pharmacies also feeling the pinch from thin margins and rising inflation.

“About 85 percent of the drugs are imported and the exchange rate is a very important component of this,” Shyam Sathasivam, President of the Sri Lanka Chamber of the Pharmaceutical Industry told reporters in Colombo (SLCPI).

SLCPI says drug prices were frozen by gazette notice in March 2014. At the time however the exchange rate was stable.

A National Medicinal Regulatory Authority was set up in 2015 which slashed prices of 38 drugs.

The US dollar was at 131.04 rupees in the spot foreign exchange market on in December 2014 when the current administration came to office. The rupee started to fall from around January 2015 amid money printing.

“When there is unsustainable pressure on the supply chain, quality gets compromised, compliance gets compromised and that would lead to risks for patient,” Sathasivam said.

“So we have to ensure that sustainability is a core part of what we do.”

The industry said at the time it re-negotiated prices with suppliers.

The NMRA slapped price controls on more drugs recently. A basis for pricing had been explained in the first batch of molecules, which seemed to be following a model devised in India. Sri Lanka also had a cost plus model earlier, which can manipulated by boosting import prices.

SLCPI says in the latest batch, price cuts seemed ad hoc and they have no knowledge of how it had been done.

Sathasivam says in some other countries too there are price controls so they are willing to work with them.

“What we have continued to ask for is the same thing that is framed in the NMRA Act; a transparent process where all stakeholders are involved, where there is clarity on the choice of products and choices of formulae that goes towards it.

“We saw some movement in this direction when we appealed to the ministry and got a 5 percent adjustment based on currency devaluation.”

The NMRA has only allowed a 5 percent rise in drugs despite steep currency depreciation in the entire period. The rest of the drug prices have remained fixed.

The second round of price slashing was announced recently.

“This has come as a further surprise to the industry, because there has been no set formula that was articulated unlike last time, while at the same time not acknowledging that the currency has continued to devalue,” he said.

Sri Lanka’s rupee has continued to depreciate ever since a money printing central bank was set up in 1951, abolishing a currency board that kept the exchange rate fixed since 1885.

“It is the Central Bank that destroys the currency and pushes up the cost of drugs,” EN’s economic columnist Bellwether wrote in October 2015, (Sri Lanka’s pharma control Neros fiddling while Colombo burns with falling rupee) when the central bank was in the middle of currency crisis it triggered by unprecedented money printing.

“When the currency is destroyed by the state, prices of all imported and domestically produced goods go up. Already this administration has destroyed the rupee from a little over 130 to over 140 rupees now,” Bellwether wrote at the time.

“So import costs of drugs are up 7 or 8 percent already this year, thanks to the state, rulers, bureaucrats, the Central Bank and the state generally.

“If prices have not gone up already, it is due to private sector efficiencies and a reduction in margins they have taken. Money is still being printed. Expect more currency depreciation.”

“The NMRA is a farce. It is a dangerous farce. If the rulers want to keep prices down, not only of drugs but of all goods, first follow prudent monetary and fiscal policies that allows for exchange rates to be stable.”

Economists and analysts have called for the central bank to be abolished in favour of a currency board or the country to be dollarized so that permanent currency depreciation will no longer make ‘cost of living’ the biggest issue in political discourse.

From the beginning of 2015 to August 2018, the Colombo Consumer Price Index had risen 19.8 percent. The so-called core inflation index, considered another farce by critics, has risen by a faster 20.1 percent.

Across the distribution chain, costs have risen including at retail pharmacies, industry officials say.

“The cost compliance and storage has been rising over the four years,” says Kasturi Wilson, Senior Vice President of SLCPI.

“Pharma products have to be kept a temperature, which is less than 22 degrees.”

There have been volume growth in drugs in urban areas after price controls but not in total revenues or margins of pharmacies, she says.

“Sri Lanka’s interest rates have gone up in the last few years. The retailer have a huge hit on the margin. The distributors also have huge costs of operations.

“The retailers have started defaulting and they have to support them.”

“Retailers who used to repay in 30 days are taking 45 to 60 days. Because their working capital gets tied up they do not have the ability to repay.

“The absolute earnings of these people have decreased. They have gone to the minister and asked for margin increase.

“The biggest problems as an import dependent country is we cannot deal with the exchange losses. In fuel it has been done – but not in the pharma industry. Whether the whole pharma industry is sustainable is a questioned here.”

Kasturi says the importers have to hold 4 to 5 months of stocks on average. Large European manufacturers require 8 to 9 months of imports to meet minimum or quantities.

“When we had the first price control of 48 item, overnight the importers and manufacturers took the loss. We had about 5 months of inventory. You had inventory at distributor and retail point. We took all the losses. It is the same this time.”

This time the NMRA had ordered price controls on taxed goods as well.

“Again we have losses of four months. Because they are essential items we cannot afford to be out of stock. But now we must be forced to do this. These are issues we face practically.”

Some of the controlled prices are below India, the SLCPI says. India also has price controls.

SLCPI says Sri Lanka’s pharma market is estimated at 80 billion rupees with 50 percent coming from private sector imports, 10 percent from domestic manufacturers and state pharma chains, and the rest accounted for by sales to state hospitals.

Imported foreign drugs are about 85 percent of the total.

There were 364 manufacturers providing 798 different molecules (drug chemicals) with 3,474 brands available in the retail market. On average there were 4.3 brands per molecule, giving a choice to consumers.

There were also more brands registered mainly to compete in contracts for the state hospitals. If there are large number of registered drugs, the more competition and potentially lower prices for the state.

There have been criticism of the number of registered drugs by some officials.

It is not clear whether this is done due to pure ignorance based on lack of education on simple economics (if there are more suppliers a market becomes more efficient), some weird Marxist hang-up about restrict economic freedoms of consumers, or to deliberately limit competition at government tenders, so that only a favoured few can bid for a particular drug.

Under a cost-based formula firms will be incentivised to show higher costs rather than cut them, while under a free market competition, firms will try to improve productivity to bring costs down, economic analysts say. This has been graphically seen in the regulated public bus transport, where quality has fallen while in the free market three wheelers, productivity has risen remarkably and prices do not go up as fast.