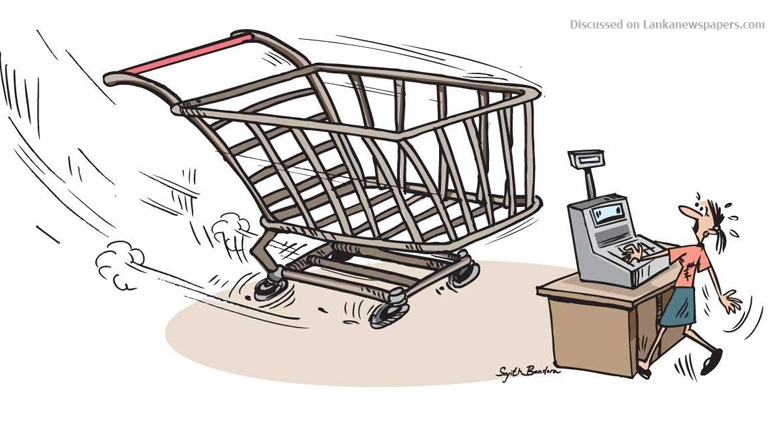 Chandani is 21 and the sole breadwinner of a family of three. Standing at the cashier’s bay at a plush supermarket in Colombo she serves each customer walking in to pay their bills. “Most of the days I work here from 8.00 in the morning to 11.00 in the night, that’s how I make ends meet” she told the Daily Mirror Asked her if she remained standing during that entire time, she replied in the affirmative. “Yes, we have to ” she responds.

Many of the female and male workers stationed around the island at supermarkets go through the same predicament as Chandani, an investigation by the Daily Mirror revealed. Paid just above the minimum wage, they are given a basic salary ranging from Rs.12,900 (recruited as trainees and an increment of Rs.1,000 upon confirmation) to 17,500 (upper limit). The rest of the pay packet depends on the hours they put in as “overtime”. Cashiers who need to possess a pass in Mathematics at their O/Levels are given a Rs.1,000 higher than the Customer Services Assistant (CSA), the staff member who walks down the aisle.

“We usually have to work for over 100 hours in order to earn overtime to take home something around Rs. 25,000”, Piyumi another 20-year-old Customer Service Assistant working at another supermarket in Colombo told us.

“The store opens at 8.30 am but we have to be here by around 7.00 am. We close at 10.00 pm, but by the time we leave the place it is around 11.30 in the night”. Daily Mirrorroamed around a few of Colombo’s supermarkets from 11.00 pm onwards. The workers remained inside the stores, although the doors were closed for customers.

The basic salary is paid for the standard shift. The rest has to be earned through working overtime. The shifts are in violation of the Shop and Office Act under which they are employed. The standard overtime ranges from around Rs. 90 to Rs.103 per hour, depending on which chain one asks.    “So if we are to make an extra Rs.10,000 which is usually 100 hours extra, we have no option but to do 6-7 hours overtime for around 15 days a month” they told us. The minimal allowances or the statutory EPF, ETF deduction to the salaries have not been included in the calculation. Most of the employees look forward to a public holiday to work on which they get paid a full day’s overtime. They were given four full days and four half-a-days with the option of opting to work “overtime” on the “holidays”. Most workers were hesitant to provide us with the information despite our disguise as potential seekers for jobs for “a family friend’s daughter”, the Cashiers, Customers Service Agents insisted on us speaking to their superiors. But during each visit and each check out they obliged with basic details. “I am paid Rs.12,900 and have been here since 7.00 am in the morning” one of the Cashiers told us as we checked out on the night on August 23.

“Do they need to be standing the whole time?” We asked the person who identified herself as a ‘Human Resources Officer’ at another supermarket, sounding some concern. “Yes, that is a part of their job” we were told.

“Have you been standing the whole time?” We asked. “Yes, except during the lunch break”, which we were told was not a set time. “15 to 30 minutes is what we have”.

“Do they need to be standing the whole time?” We asked the person who identified herself as a ‘Human Resources Officer’ at another supermarket, sounding some concern. “Yes, that is a part of their job” we were told. “For 14 hours a day for half the month?” We persist to receive a gentle smile from the Human Resources Officer. “That is what they sign up for. Look at the experience they get,” she told us.

Despite some of the information being  initially forthcoming, there was evident reluctance to divulge during the second visits to the same branches. In fact, a person identifying himself as an ‘Executive’ at one of the branches sought to speak on behalf an employee. “They can take around Rs. 40,000 home” he said without batting an eyelid. We looked at the Customer Sales Agent (CSA) standing right beside us and asked if it were true, she smiled. The dynamics of the working hours are intriguing. Sometimes, there is a standard number of hours that all employees of a particular branch could work overtime. “During some months we get a set number of hours and all of us share these hours with the rest of our colleagues. If we are understaffed someone would be lucky to put in more hours of overtime”, the Human Resource Administrator at one of the branches of a Colombo-based supermarket told Daily Mirror “So tell her she can earn close to Rs. 30,000 if she works hard”, we are told to convey to the potential recruit.

What was indicative that even in one chain, there are no standard practices. They differ from branch to branch.

We tried doing the math again. If we are to take Rs.15,000 as the base salary, that is Rs.15,000 lesser than the 30,000 we were told a person “working hard” could earn and we are to assume each worker gets Rs.100 per hour as overtime, that is a cumulative of 150 hours they have to work extra to make the additional Rs.15,000. That is for a 26-day a month, 5 hours extra each day again assuming that they would be working the entire month to catch up to the 150 hours. 12 hours every day on their feet, smiling to the unsuspecting customer, greeting them hiding the suffering behind the standard logo “smile at all customers”. The calculation is based on a cumulative or aggregate figure which varies minutely depending on who and where you ask.   All supermarket chains provide lodging if required or transport if the residence is located within a certain parameter. “She can claim Rs. 2,000 extra for boarding per month if she lives outstation and doesn’t want to stay at the boarding house”. The conditions at the boarding houses, the workers are given as lodging, bears a different story altogether.

We asked Pathum (22), a male who works as a cashier at one of the branches whether the income is enough to survive. “This is how it is, isn’t it? I either can’t live, because we only get paid Rs. 17,500 basic with minimal allowances or I don’t have a life as I have to live here to earn Rs. 30,000” he told us.   Many of the outlets are understaffed and as a result those working are given the “benefit” of overtime.

Pathum was doing a full days shift when we met him. 7.00 am to 11.00 pm. We asked him how often he does this. “I try to do 130 to 150 hours of overtime each month” he said. That is virtually spending his life — except his sleeping hours — at the supermarket. He did not seem to mind it. “This is good, we work hard and we earn more, that is how it should be isn’t it?”

All supermarket chains provide dinner to the employees who do the night shift. The rest have to fend for themselves. Some provide lunch, but most don’t.

Some supermarket chains had stools or chairs behind the cashiers’ counter, while the others did not. Depending on which chain and which branch one walks into the conditions are self-evident. We ask them whether they are allowed to sit. Any consumer who has shopped at a supermarket would be aware that seldom have they seen a worker seated on the stools/chairs provided. Even the worker at the counter that is not busy.

“No we aren’t allowed to sit” we were told. Repetitive Strain Injuries or the long term spinal cord related complications which can ensue as a result of how the work is ignored. “We are only given a training on the main routine work. We weren’t taught how to move our body to minimize any health risk” Wathsala 22, told us. Many of the female workers were bonded into overtime. “I have taken a loan, and if I am to survive and send money home, working overtime is a must. The basic isn’t enough to even look around”, Chandani told us.

“No that’s nonsense, have you looked at the benefits they get?” We replied in the affirmative and broke it down to the numbers. Then we were told that “this was the industry standard”.

During a casual conversation with a member of the Management Committee of one of the Chains, we brought this up. First there was the denial. “No that’s nonsense, have you looked at the benefits they get?” We replied in the affirmative and broke it down to the numbers. Then we were told that “this was the industry standard”. “This is how labour markets operate, we can move into automation. It’s a free market and these people come here because they get their benefits”. Hardly an argument there, except that the argument had be brought time and time again, world over including against the Plantation workers in Sri Lanka. “They are given three meals a day, lodging and transport, so the real costs have been covered” we were told. Hardly true, but we plodded on “How would a customer react if they were seated? That is why they are not seated” he told us. “The overtime is their choice, if they want to earn more they have to do that”, he said before asking us to give them a figure we thought could be the best minimum wage to be paid.

Chandani, however, insisted that she had no choice in the working hours. “How could I take care of my family with Rs.17,500 sir? She asked. I have no choice but to continue doing these hours”.