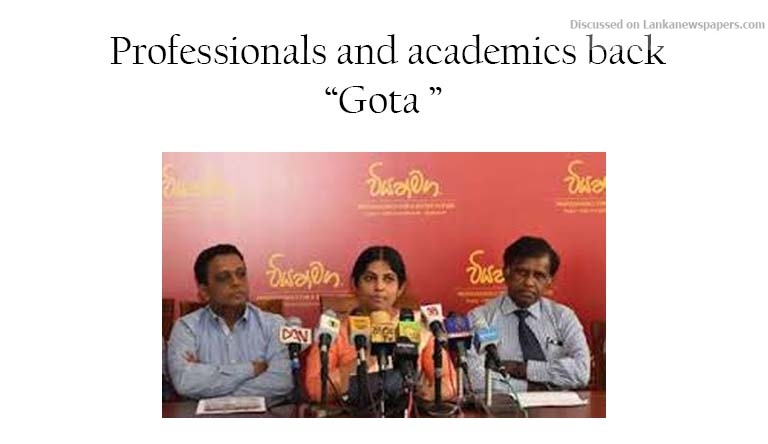 A collective of academics and professionals today backed ‘Viyath Maga’ organization headed by former Defence Secretary Gotabaya Rajapaksa, with the objective of engaging in policy making process of a future government.

Addressing a news briefing under the banner ‘Viyath Maga’, they said their intention was not to rally behind individuals but to support the policy making process which is being carried out by Mr. Rajapaksa, to be implemented in a future government.

Ms. Nuwantha Kulathunaga, a lecturer of the Peradeniya University said they have identified the need for the professionals to get engaged in developing veritable and practicable solutions for the country’s problems.

“As professionals coming from all spheres, we have identified Viyath Maga as the right and the only forum to change the course of the history by working together, to identify issues and propose solutions that will last for generations to come in Sri Lanka,” she said.

She said the current system is corrupt in Sri Lanka and that if it was not changed, finding solutions to economic, cultural and social plights would be impossible.

Professor Ranjith Premalal De Silva spoke about issues in the field of agriculture and said the government continues to curtail concessions to farmers.

He said the Ministry of Agriculture was mulling to reduce the number of fields which are being cultivated, by 20 per cent.