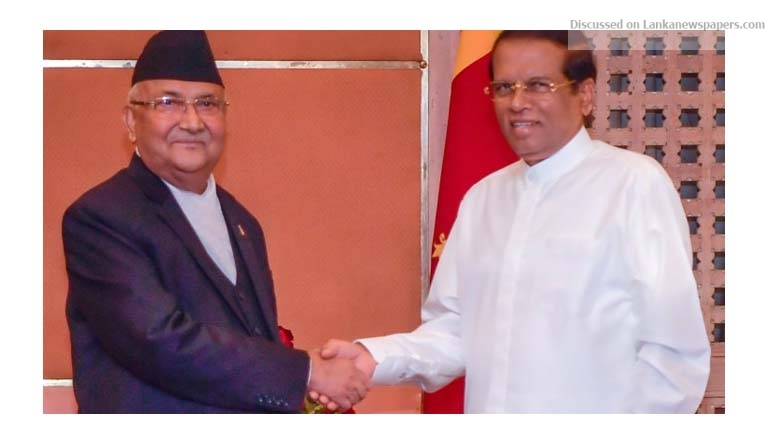 Leaders of Sri Lanka and Nepal agreed to work in mutual cooperation for the benefit of the people in both countries while building close and strong relations between the two countries.

President Maithripala Sirisena, who visited Nepal to attend the 4th Summit of the Bay of Bengal Initiative for Multisectoral Technical and Economic Cooperation (BIMSTEC), met with the Prime Minister of Nepal K.P Oli, today (01).

President Sirisena drew the attention of the Nepali Prime Minister regarding expanding facilities for the visiting Sri Lankan devotees to the Lumbini.

Both leaders pledged to closely work in the international forums and agreed to work in more cooperation in the regional activities.

During this meeting, both leaders specially discussed in detail regarding the activities of the BIMSTEC organization and the Prime Minister of Nepal extended his best wishes for President Sirisena for his new appointment as the Chairman of the BIMSTEC and said that he will provide his fullest assistance to fulfill duties of this position in a successful manner.

The Nepal Prime Minister said that he is confident that as an experienced and matured politician President Sirisena will be able to handle the future activities of the  BIMSTEC in a strong and meaningful manner.

The President extended his gratitude to the government of Nepal for holding the 4th Summit of the BIMSTEC in a highly successful manner as well as for the warm welcome and hospitality given to him and his delegation.