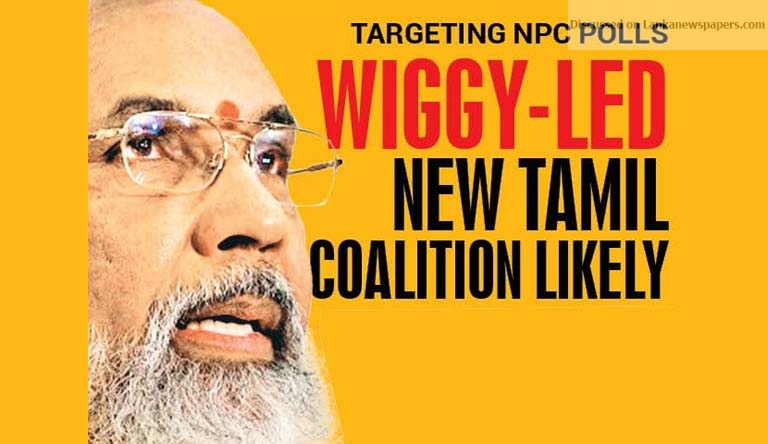 A new coalition, on the Tamil political front, led by Northern Chief Minister C.V. Wigneswaran is likely to emerge targeting the next Northern Provincial Council election.

In the backdrop of efforts being taken to patch up the differences between the Tamil National Alliance (TNA) Leader R. Sampanthan and the Northern Chief Minister, a new coalition is likely to emerge with the Tamil People’s Council (TPC), co-chaired by Chief Minister Wigneswaran, which was formed two years ago, expected to play a key role in forming it.
The TPC comprises several prominent figures of Jaffna’s civil society as well as TNA dissidents.
According to Wigneswaran, Eelam People’s Revolutionary Liberation Front (EPRLF) Leader and former TNA Parliamentarian Suresh K. Premachandran and Tamil National People’s Front (TNPF) Leader Gajendrakumar Ponnampalam are on the same wave length with him on bringing out an alternative political framework, before the next Northern Provincial Council election.
The Northern Provincial Council’s term ends in another one and half months.
Informed sources said that the TNA hierarchy was expected to go for a reshuffle in fielding the candidates for the Northern Provincial Council polls and several new faces were likely to emerge.
Meanwhile, the TNA hierarchy’s decision to participate in the Presidential Task Force meeting today, has come under severe criticism from Wigneswaran, who has decided to keep away from the meeting.
Wigneswaran claims that today’s Presidential Task Force meeting is meaningless and has pointed out that a political solution to the North and East was the priority and the development activities were secondary.

Wigneswaran has also lambasted the TNA Parliamentarians, saying they were not bothered about the people but only about their positions and money.
TNA Jaffna Parliamentarian and Illankai Tamil Arasu Katchchi (ITAK) leader Mavai S. Senathiraja has responded that Wigneswaran’s comments were highly irresponsible. Meanwhile, the Tamil People’s Council meeting, on the present state of the Tamil political scene, will be held on Friday (31) in Jaffna, where the Wigneswaran is expected to clearly announce his stance and on the possibilities of a new Tamil coalition being formed, sources added.