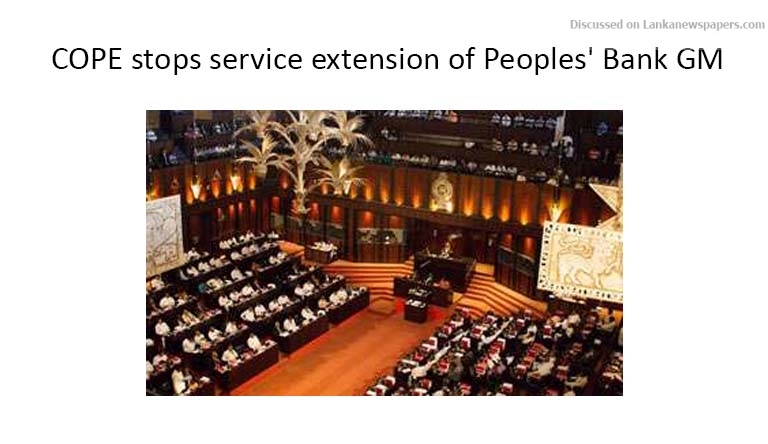 The Peoples’ Bank (PB) General Manager is under fire for asking for an extension of service, drawing an ‘exorbitant salary’ and drawing salary arrears to the tune of Rs.70 million and the Ministries of Finance and National Enterprise Development had agreed to carry out the recommendation made by the Committee on Public Enterprises (COPE) to stop the service extension, Parliament was informed today.

COPE Chairman MP Sunil Handunnetti informed the House today that both the Ministry of Finance and Ministry of National Enterprise Development had agreed with the recommendation made by COPE to stop the ‘illegal’ extension of service.

Mr. Handunetti said the General Manager had asked for an extension, despite reaching the retiring age of 60 and had drawn a monthly salary of Rs 2.1 million while collecting a sum of Rs.70 million as arrears.

National Enterprise Development Minister Lakshman Kiriella said the government agrees with the recommendation made by COPE.

State Minister Dr. Harsha De Silva said high salaries are given to officials of state enterprises which compete with the private sector so that competent people could be attracted to the posts.

“ We have to pay proper salaries so that able people are not drawn towards the private sector,” he said.

JO MP Dr. Bandula Gunawardene said some state enterprises run at a loss as a result of paying exorbitant salaries to its officials.

He stated Srilankan Airlines was a good example for this situation, where the airline had not received any benefit by appointing Suren Ratwatte as its chairman.