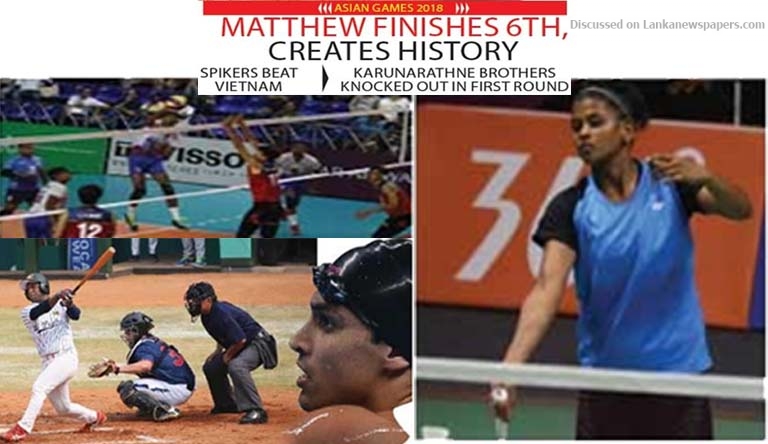 Swimmer Mathew Abeysinghe created history by producing the best performance by a Sri Lankan male swimmer in the Asian Games history when he finished 6th in the 100m freestyle final at the 18th Asian Games yesterday.
Matthew finished third in the heats with a time of 50.14seconds and came for the final as the fourth fastest swimmer. In the final he clocked 49.28 seconds, just 0.17 seconds off his personal best and finished sixth.
All other swimmers were eliminated in the heats. Akalanka Peiris and Cherantha de Silva finished overall in 25th and 26th position in the 50m butterfly, while Peiris also finished 16th overall in the 200m back stroke.

Kyle Abeysinghe finished third in the 100m free style heat but was 13th overall and missed out from the final.
Wins for Sri Lanka came in volleyball (men’s) and badminton. The Sri Lankan team had a close encounter in the first set against Vietnam, which they won 25-23, but the next two sets proved relatively easier (25-18, 25-18).
The shuttlers registered two wins – one in the women’s singles and the other in the men’s doubles. Kavindi Sirimanne received a relatively easy draw against Saudi Arabia’s Shatha Almutairi winning 2-0 (21-4, 21-4).

The doubles duo of Sachin Dias and Buwaneka Goonathilaka beat Macau’s CHE Pui Ngaiand and PUI Pang Fong 2-0 in the round of 32 to advance.
Highlight of the day was Olympic shuttler Niluka Karunarathne and his brother Dinuka being eliminated in the very first round. They lost to Korea’s Choi Solgyu and Kang Minhyuk 2-0 in the round of 32.
In archery, Sajeewa de Silva advanced to round of 16 in the recurve individual, but lost in the round of 16.
In teakwando, Kumudu Kalpani advanced to the quarter-final beating Pakistan’s Syed Zadi, but lost against Japanese Yamada Miyuru in the quarter-final.
There were no winners in the squash event either, as all four players were beaten in the first round.