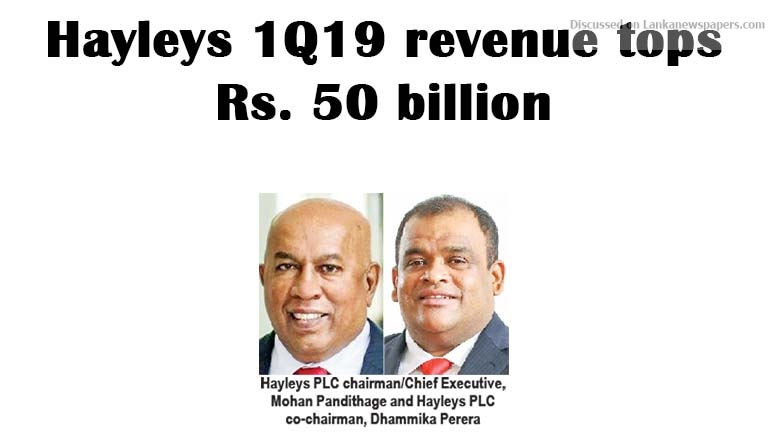 Hayleys PLC, generated strong top-line performance across all of its key business verticals resulting in a 74% Year-on-Year (YoY) increase in revenue up to Rs. 50.6 billion during the quarter ended 30th June 2018 (1Q19).

Revenue within the Consumer & Retail segment expanded substantially from Rs. 1.2 billion to Rs. 16.6 billion in 1Q19, bolstered by the contributions of Singer (Sri Lanka) Group which was acquired by Hayleys at end of 2Q18, generating Rs. 1.3 billion in operating profits.

“As we celebrate 140 years of Hayleys in Sri Lanka, our organization continues to chart an impressive trajectory into the first quarter of the new financial year. Our significant investments towards the acquisition of Singer (Sri Lanka) are already yielding valuable returns for the Group and we anticipate further improvements from this sector as we begin to generate greater synergy with the Hayleys brand moving forward.”

“Combined with an impressive resurgence from our manufacturing sector and improvement in top line performance across all our core businesses, the Hayleys Group is poised for a year of growth and innovation,” Hayleys chairman and Chief Executive, Mohan Pandithage stated.

Eco Solutions turnover increased from Rs. 1.1 billion to Rs. 1.5 billion, while operating profits expanded substantially from Rs. 46 million to Rs. 87 million during the quarter in review.

The Group’s Agriculture Sector also recorded an improved performance with turnover expanding to Rs. 2.9 billion, as compared with Rs. 2.5 billion, while operating profits improving to Rs.224 million from Rs.83 million in the corresponding period.