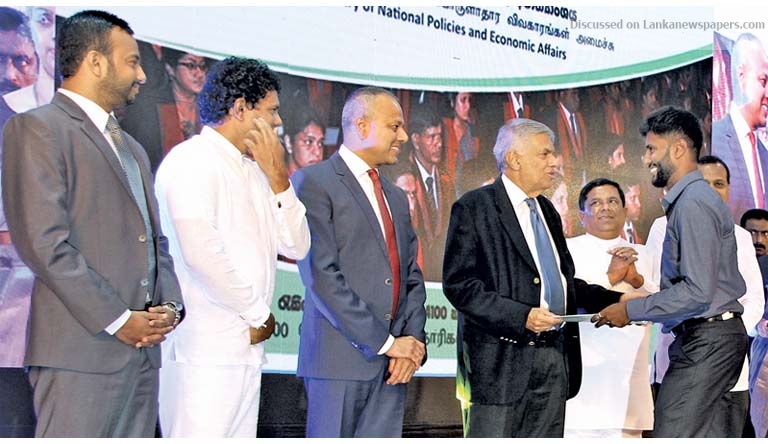 By the end of 2017, the government has generated 700,000 income sources including 430,000 direct employments, self-employments and foreign workers, Prime Minister Ranil Wickremesinghe said yesterday.

The Prime Minister also said that during the two year span from 2015 to 2017, the number of employees receiving pension or EPF schemes have increased from 7.8 million to 8.2 million.

Prime Minister Wickremesinghe also said that the government’s target is to decrease the total debt of the country to 60% of the Gross Domestic Product by 2025.

The Premier made these observations speaking at the ceremony held to handover government appointments to 4,100 graduates as development officers, under the graduate scheme.

The ceremony was held at Temple Trees last evening.

“We had to take some tough decisions. We were repeatedly attacked and blamed or taking these decisions. There comes a time in life when we have to take difficult decisions and suffer the repercussions. As a government, we took those decisions and in return we had to undergo an election loss. However, we cannot go ahead without forming a strong foundation upon which we can develop the economy,” he said.

The Premier also observed that many Asian countries, including Bangladesh, Thailand, Indonesia and Vietnam are economically advanced while Sri Lanka remain in the same position for decades.

He also said that the young generation of the country deserves such an advanced development in Sri Lanka as well. “At the beginning, the employment opportunities were less. We are absorbing graduates into public service as development officers in three stages. Some may blame us, but I don’t want to recruit all the graduates and create a situation where they even won’t have a chair to sit at the office they are to work. If we did so, it would have been a disrespected to your qualifications,” the Prime Minister said.

Addressing the new appointees, Prime Minister Wickremesinghe further said; “Now we are ready to go that distance. When we took over this government in 2015, it was like a dilapidated vehicle. We had to repair it. We painted it in both green and blue. Now it is ready to take us forward, slowly, but surely. In future, we can accelerate our journey. You are also now a part of this journey. I hope you will give your best and be dedicated to this country.”

Premier Wickremesinghe also requested the new development officers who will be attached to the Home Affairs Ministry to provide their service to the Gamperaliya rural development project.