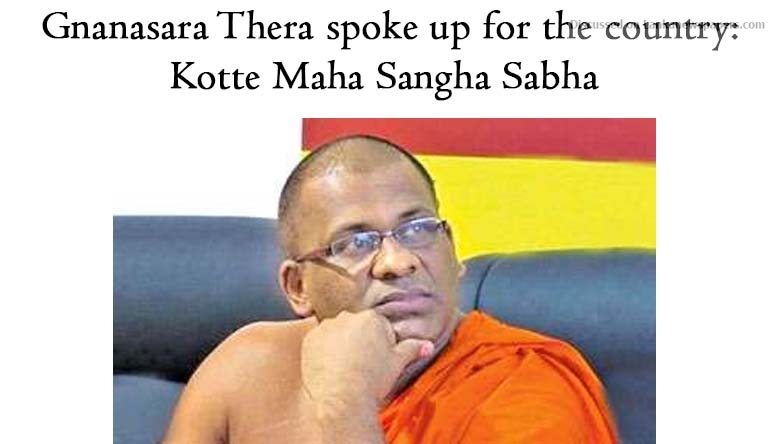 In a letter to President Maitripala Sirisena with regard to the imprisonment of Bodu Bala Sena general secretary Ven. Galagodaathte Gnanasara Thera, the Mahayanayake of the Kotte chapter of the Siyam Nikaya, the Most Ven. Ittapane Dhammalankara Thera has highlighted several points including the one that if monks who speak on behalf of the people and the country were imprisoned, it would pose a challenge to the entire Bhikkhu community.

The letter states: “It is our responsibility to express some sentiment with regard to Ven. Galagodaathte Gnanasara Thera since he belongs to the Kotte Sri Kalyani Samagri Maha Sangha Sabha. Since the court proceedings regarding him are not over we would not delve into it. Therefore our Sangha Sabha has decided to bring the following points to the attention of the President.

The offence that is said to have been committed by the Ven. Galagodaatte Gnanasara thera at the Homagama Courts was not committed to achieving a personal benefit. The incident took place because of the deep concern that arose within the venerable thera towards the members of the military intelligence who contributed immensely to rid the Sri Lankan society from the cruel war.

From ancient times the Sri Lankan Bhikkhu was a character that always stood and fearlessly spoke for the country and for the benefit of the wider society.

If the Buddhist monks who speak on behalf of the country and the people are imprisoned it would pose a challenge to the entire Bhikkhu community.

We would like to further state that the Kotte Sri Kalyani Samagri Maha Sangha Sabha stands for the country as well as for all communities and religions and highly values justice and fairness.”