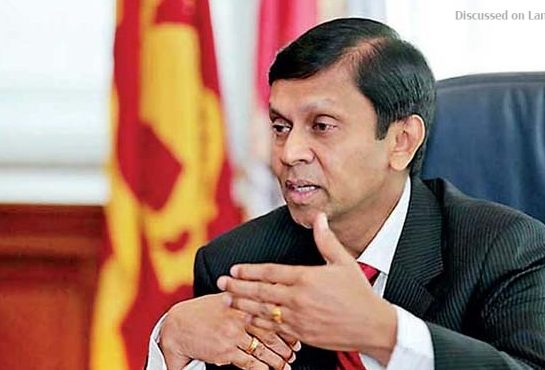 The Yahapalanaya bond scams from February 2015 to June 2016 inflicted staggering losses on the country, economy and people of Sri Lanka, and irreparably damaged the country’s reputation.

The people have watched with helplessness, the biggest-ever scam committed in Sri Lanka, unfold before their very eyes. The people have endured in dismay, the determined cover-up being carried out by a group of ultra-corrupt politicians, officials and others. The people have suffered in silence, the ignominy of observing the mastermind who provided leadership to the Scams, pontificating “good governance” to others. The people have seethed in anger, when observing one of the main suspects in the Scam, Governor Arjuna Mahendran leaving the country with impunity and evading arrest. The people have cried in anguish, on seeing the Prime Minister (who loftily announced that he would take personal responsibility for all actions of Governor Mahendran at the time of the latter’s appointment), now claims he is unaware of Mahendran’s whereabouts.

Against this background, the people have rightly concluded that the present administration will never take the required steps to punish the wrong-doers or recover the losses, since the current rulers are totally compromised due to their complicity in the Scam. The people are therefore yearning for justice from a future administration. They want the losses and damages suffered by the country, economy and the people, recovered. They want the suit-attired masterminds of the Scam, masquerading as “good governance” champions, punished. They want those who covered up the Scams, both for cash and other material gain, named and shamed. They want all who have aided and abetted to commit Sri Lanka’s greatest fraud, exposed.

They want the different organs of the State to do their respective duties and uncover the evidence, establish the facts, analyses the findings, and use all legal measures available to the government, to bring the perpetrators to justice.

As is well known, several leaders of the current government made many vague and unsubstantiated accusations against leading politicians and officials of the Rajapaksa government, in the run-up to the Presidential Elections of 2015. e.g., USD 18 billion deposits in overseas bank accounts, mega commissions of over 50% of contract values on highway construction contracts, imports of “golden” horses, helicopters and Lamborghini cars by the Rajapaksa family, mansions and hotels in Dubai owned by various leaders, etc. However, after three and a half years of intense investigations, involving even the active co-operation of US and Indian authorities, these highly-publicized searches have failed to reveal a single bit of evidence that supports those outrageous allegations. As a result, the vast majority of the People of Sri Lanka are now convinced that those accusations had been deliberate lies uttered by opportunistic politicians in order to mislead the public.

In stark contrast however, a great deal of credible evidence has been publicly exposed, pertaining to several major Scams carried out by the current “Yahapalanaya” leaders, with the bond scam being the most significant. As a result, the people of Sri Lanka are already familiar with many of the facts surrounding the bond scam, and the roles played in this Scam by the top leaders of the present regime. In the face of such evidence, the people of Sri Lanka now know that the bond scams are real and factual, and are not figments of anyone’s imagination. In fact, the people have already been shocked with evidence of several top-level government politicians and their acolytes enjoying the fruits of the ill-gotten gains flowing from the bond scams. They have been confronted with startling revelations of massive sums of money being freely distributed to politicians and others across the state network.

Against that background, a future government must deal with this deep-rooted and well-planned Yahapalana Bond Scam with several Strategic Thrusts in an integrated approach, as set out below:

(a) Punish all perpetrators and accomplices of the Bond Scam to the full extent of the Law, without limiting the punishment only to the errant Primary Dealer Company, Perpetual Treasuries (Pvt) Ltd, and its officials, as being done presently.

(c) Name and shame all who have knowingly aided and abetted the commission and the cover-up of the Bond Scams, including those who have carried out the “cover-up” tasks to secure political and/or other advantages for themselves.

(d) Take steps to mitigate and/or stop the continuing losses that are being suffered by the Government, economy and people as a consequence of the long-term ill-effects of the Bond Scams.

(e) Implement the required administrative procedures and governance structures so as to permanently stop political interference of the type that took place when Prime Minister Ranil Wickremasinghe directly ordered Governor Mahendran to change the existing time-tested and highly successful technical Bond-issuing procedure of the Central Bank, in order to pave the way to carry out the Bond Scam.

(f) Initiate a special high level inquiry as to whether the massive funds illegally earned through the Bond Scam were used to finance the election campaigns of certain top-level politicians, and as to whether such finances played a material role in bringing those politicians into power at the August 2015 General Elections.

(g) Recognize all those who bravely exposed the Bond Scams, and stood firm in the face of intense political pressure unleashed by the top leaders and officials of the Government, including the Prime Minister, several key Ministers, State Ministers, Deputy Ministers, Central Bank Governor Mahendran and other officials, who did their utmost to frighten and browbeat certain whistle-blowers and honest officials from exposing the Bond Scams and the quantification of the losses.

Since a considerable quantum of relevant material and analysis carried out by many experts over the past three and half years is already available, the implementation of the Strategic Thrusts listed above could be carried out in a time period which will probably not exceed 12 months from the date of a new Government assuming office.