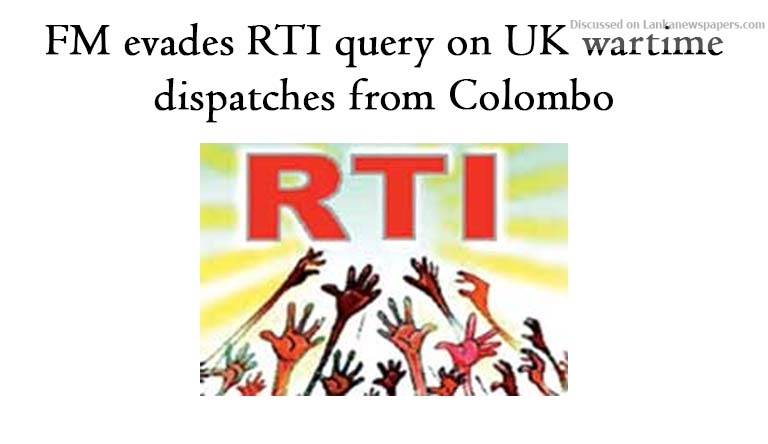 Foreign Ministry has refrained from responding to a query whether it would brief the Human Rights Commission of Sri Lanka (HRCSL) as regards wartime British High Commission dispatches that cleared the Sri Lankan military of alleged massacre of 40,000 civilians on the Vanni east front.

Sri Lanka brought the war to a successful conclusion in May 2009.

The Island recently sought clarification in this regard from C.A.H.M. Wijeratne, Senior Director General (Legal) in accordance with the Right to Information (RTI) Law enacted early last year. Wijeratne recently received approval from the parliamentary High Posts Committee to take up appointment as Sri Lanka’s Ambassador to Poland.

British High Commission dispatches from its Defence Attache Lt. Colonel Anthony Gash’s Office during January-May 2009, placed the number of maximum killed at 8,000 with one fourth of them being LTTE cadres. They were placed before the House of Lords in Oct last year.

The Island submitted the following query to the Foreign Ministry: The HRCSL is in the process of vetting SLA personnel assigned for UN missions in various parts of the world. One hundred and one SLA personnel are awaiting clearance since early March this year to join UN mission in Lebanon. The Island learns that the HRCSL has not been officially informed of British military dispatches therefore still goes by unsubstantiated original accusations. May I ask whether the Foreign Ministry intends to brief the HRCSL in this regard?

The Foreign Ministry has sent us the following response: “The HRCSL was requested to carry out the local civilian screening process required for the deployment of personnel as required by UN Secretary General’s decision No 2012/18. The Foreign Ministry made available a copy UN document that dealt with human rights screening process of UN personnel.

However, the Foreign Ministry desisted from responding to the specific query regarding its duty to brief the HRCSL in respect of fresh information.

Meanwhile, a senior military official yesterday told The Island that the armed forces were awaiting the finalization of the Standard Operating Procedure (SOP) meant to govern the deployment of officers and men under UN command. Speaking on condition of anonymity, the official said that they (the military) along with HRCSL recently had a video conference with Geneva and New York based officials to discuss the available draft. “We are concerned about some aspects of the original draft and,therefore, certain amendments were suggested. We are confident an agreement can be reached soon to enable the HRCSL to begin the vetting process.”

A major section of the 150-man 12th Force Protection Company (FPC) assigned for United Nations Interim Force in Lebanon (UNFIL) is awaiting the completion of the clearance process. The group comprising 101 personnel was originally scheduled to leave on March 6, 2018.

SLA joined UNFIL mission in 2010, a year after the conclusion of the conflict. Since then, 11 contingents has served there.