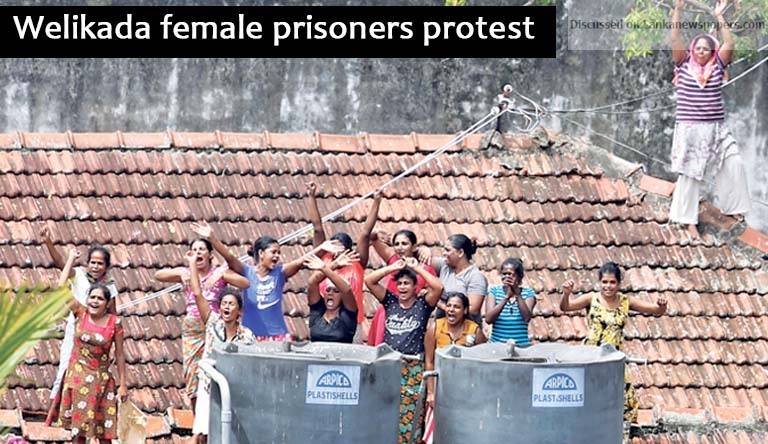 Around 25 female inmates of the Welikada Prison had got onto the prison roof and staged a protest yesterday morning against a decision taken by the prison authorities to limit the food items allowed to be brought from outside and demanding that their cases be taken up for hearing early.

However, the prison authorities said that bringing food inside the prison was limited from last week as they had found that drugs were being smuggled into prison concealed in the food items.

The female prison inmates had been behaving in a disrorderly manner last morning in protest against the limiting of food allowed to be brought from outside and had subsequently got onto the roof of the prison building and staged a protest.

It is also reported that the majority of female inmates engaged in the protest are those serving prison terms relating to drug cases.

Meanwhile, Justice and Prison Reforms Minister Thalatha Athukorale had told the media during a ceremony in Nivithigala yesterday that regardless of the prisoners’ protests, cases cannot be expedited and they must follow the regular procedure.

The Minister had noted that despite being imprisoned, illegal activities were still taking place within the prisons and she would not hesitate to take all possible measures to put an end to such illegal activities.

Two prison inmates who were protesting on the roof of Welikada prison were admitted to hospital following a clash between two groups of woman inmates.

The injured were admitted to prison hospital yesterday evening.

Prison sources said that the protest was continuing yesterday evening too.

Meanwhile, an organisation for the protection of prisoners rights held a protest opposite the prison premises demanding that the government ensure more facilities for the prisoners.

They said that over 1,500 inmates are housed in a ward which has the capacity to accommodate only 200 inmates.