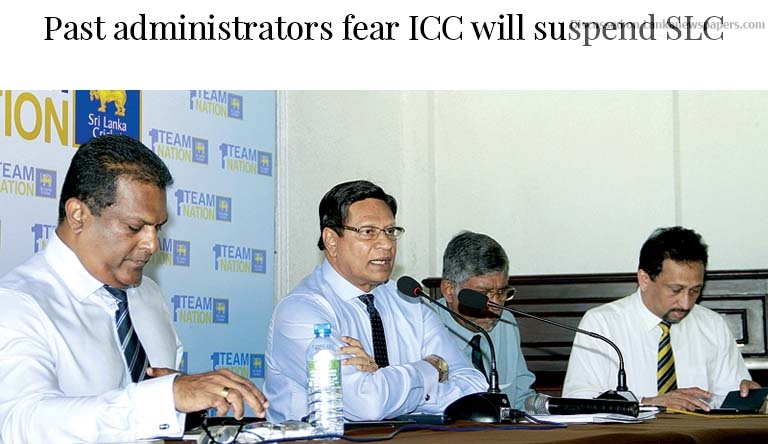 Former administrators of Sri Lanka Cricket (SLC) fears that the country will definitely be suspended by the International Cricket Council (ICC) for its failure to hold a democratic election and elect office bearers.

The ICC has already served notice that it will suspend SLC if an election was not conducted within a six month period which means that time is now running out for the government installed Competent Authority.

Former treasurer of SLC Shammi Silva said that Sri Lanka will not only be suspended by the ICC but also drain away the billions of rupees they had made by way of profits after taking over a bankrupt organization two years ago.

“We were the most profit making administration in the history of SLC but the current management (Competent Authority) has taken the progress backwards as far as settling issues and development are concerned”, said Silva addressing a press conference at the Colombo Cricket Club yesterday.

“We missed the chance to conduct the T20 LPL due to SLC election issues and even India had agreed to send their second level players to participate. All this has now been blown away,” said Silva.

“The ICC’s CEO Dave Richardson had praised us and our system of work, but the current situation has undermined everything and put SLC in a worse situation,” he added.

It is understood that the ICC is watching the Sri Lanka situation and will most likely suspend the country from international participation if an election is not held by December.

“Thilanga Sumathipala will win the election for sure because his plan and way of administration has been endorsed by the majority of clubs who are the voters,” said Silva.

He charged that some former cricketers are good at sabotaging Sumathipala and his team through mere jealousy as they will never be able to win a democratic election.

“It is only in Sri Lanka that you find these former players disrupting the progress of cricket. All they do is condemn us from the outside and are never able to come and show what they can do or cannot do. We have invited them to come and work with us for the betterment of the sport but they have refused. This alone shows how genuine they are in their criticisms,” said Silva.

Mohan de Silva, the former vice president said that all interim committees have been a disaster with the exception of the one headed by Hemaka Amarasuriya.

“Hemaka Amarasuriya was the only one person who managed it well and established a proper administration in the interim committee. The others failed and we have enough evidence to show their failures,” said de Silva.

SLC today is run by a Competent Authority appointed by the Sports Minister and are living on borrowed time after the Court issued and order of July 4 that the election of office-bearers can go ahead.

“We are ready to answer any allegation and we invited them (opponents) for a face to face debate,” said de Silva.

He also charged that the Competent Authority had mishandled the case involving the ball tampering issue and the subsequent ban on captain Dinesh Chandimal and coach Chandika Hathurusingha.

“Thilanga Sumathipala has special abilities to handle any problem in a diplomatic way and he proved it with regard to the cases involving Kusal Perera (doping) and Muthiah Muralitharan (throwing). The ICC holds Sumathipala in high esteem,” said de Silva.

He revealed that they had handed over to the Competent Authority a whopping Rs.6 billion as earnings over the past two years under the Sumathipala led administration.