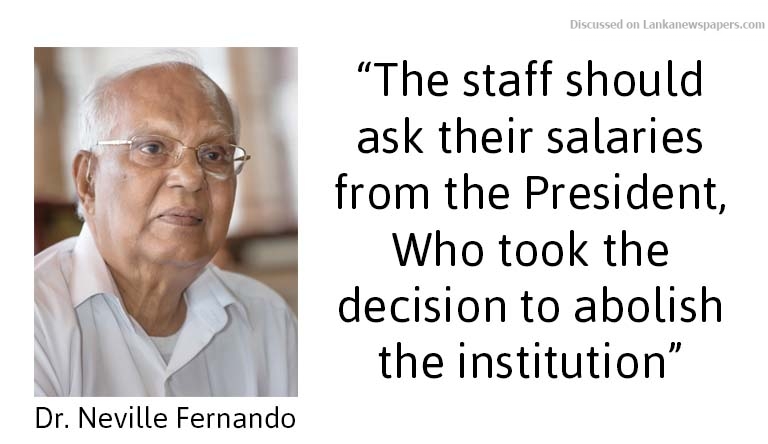 SAITM founder Dr. Neville Fernando said that as the SAITM Institute was abolished by President Maithripala Sirisena the staff should ask him for their salaries.

“There is no academic activity at SAITM since it was abolished. So, there isn’t any need for staff. As there is no income I’m unable to pay them. The staff should ask their salaries from the President, who took the decision to abolish the institution,” he said.

SAITM in an announcement issued on August 4, 2017, halted student intake, however, it had paid the staff until May.

According to an employee, academic staff salaries had been paid until the month of May while other staff cadres were not paid their July salary.

They said that since the beginning Dr. Fernando had managed the business in an arbitrary manner and even though a financial crisis existed Dr. Fernando had attempted to hire the remaining staff making false promises that their salaries would be paid.

They stressed that although Dr. Fernando had no money to pay their salaries as he had started a business in Hokandara. The disturbed employees added that SAITM should follow the standard protocols when closing down a business by compensating them before sending them home.