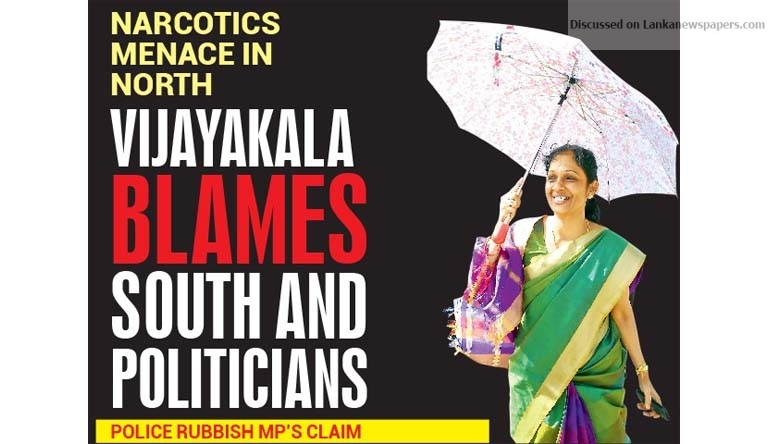 Government Parliamentarian Vijayakala Maheswaran on Friday charged that the South was responsible for supplying drugs to the North and that the menace had increased with the end of the separatist conflict in 2009.
She alleged that narcotics were moving freely from the South of the country to the North with the massive support of errant lawmakers. She was speaking at the launch of a new trophy for a soccer tournament at the Uruthirapuram Sports Club in Kilinochchi on Friday.
She added that both the Police and the Navy have seized large amounts of narcotics, including heroin, in the North and East that had been smuggled into those areas by boat from locations in the South.

She also said certain people in the South were responsible for creating drug addicts in the North where earlier people had originally consumed medicinal liquids.  According to the MP, this drug hazard rapidly spread throughout the North, since there was easy access to and from the southern part of the country with the conclusion of hostilities, between the LTTE and the security forces. MP Maheshwaran was forced to step down as State Minister for Women’s and children’s Affairs, following a controversial statement, where she called for the return of the Tamil Tigers in order to restore law and order in the North and East.

The MP’s remarks are currently under investigation while opposition lawmakers have called for her removal from the House. A senior policeman however rubbished the MP’s claims saying that a serious narcotic issue does not exist in the North at the moment adding the bulk of imported Cannabis was smuggled to the South from the Peninsula.

The Navy along with the Coast Guard has made huge detections of imported cannabis that had been smuggled into the northern part of the country from India via the Palk Strait. The bulk of the narcotic smuggling was carried out using boats with many of the smugglers disguised as fishermen, the official added.

The Navy for their part said that some 72 persons were arrested during 55 drug detections from the start of this year to date. The narcotics included 1,286 kg of Kerala Cannabis, 3.9 kg of Hashish, 3.6 kg of Opium. 0.5kg of heroin 0.1 kg of ice during this period, an official said. MP Maheshwaran could not be reached for comment yesterday.