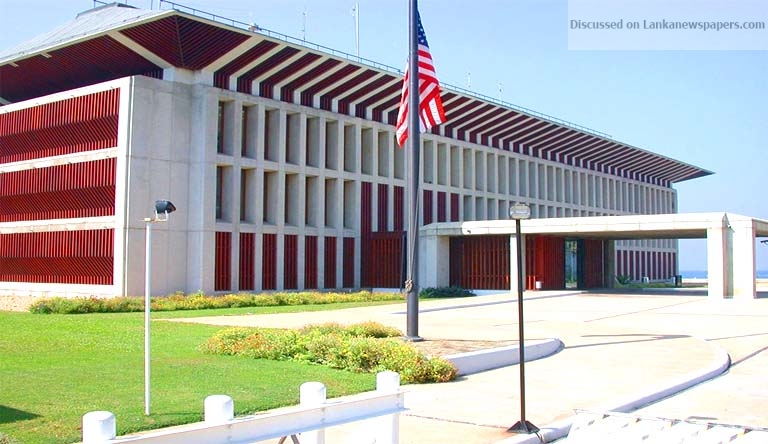 The US embassy in Colombo sent The Island a statement that reiterated US commitment to ensure the full implementation of the 2015 United Nations Human Rights Council Resolution 30/1 on Sri Lanka in spite of the superpower finding fault with the Geneva-based UNHRC in June 2018.

That statement was in response to The Island query: Against the backdrop of Geneva body addressing accountability issues and taking tangible measures in respect of Sri Lanka in accordance with 2015 Resolution spearheaded by the US (co-sponsored by Sirisena-Wickremesinghe administration), don’t you think Ambassador Nikki Haley’s assessment of the UN agency is not fair?

Sri Lanka defeated the LTTE militarily in May 2009.

In March 2011, three- member UN Panel of Experts (PoE) on the basis of information received from ‘credible sources’ accused Sri Lanka of killing at least 40,000 civilians on the Vanni east front.

US Ambassador Nikki Haley recently described the Human Rights Council as the ‘greatest failure’ of the United Nations. Haley told the Heritage Foundation think tank in Washington that the Geneva-based body had “provided cover, not condemnation, for the world’s most inhumane regimes. Judged by how far it has fallen short of its promise, the Human Rights Council is the United Nations’ greatest failure,” she said.

The following is the text of June 21, 2018 dated US embassy statement headlined US Embassy Colombo Statement on US-SL Relations: Secretary Pompeo has announced that the United States withdrew from the United Nations Human Rights Council effective June 19, 2018. Ambassador Keshap met senior Sri Lankan officials to convey the assurance of the United States Government that we will remain fully engaged with the Sri Lankan Government to help it meet its continuing and standing commitments to the international community to advance the cause of reconciliation and lasting peace for all Sri Lankans.

“Sri Lanka co-sponsored with the United States two UN Human Rights Commission Resolutions: 30/1 in 2015 and Resolution 34/1 in 2017, and the United States continues to extend its support to Sri Lanka to fulfill these important commitments and obligations as articulated and reaffirmed in these resolutions. Sri Lanka’s continued progress toward fulfillment of these international commitments will facilitate further growth of our bilateral relations and enhance Sri Lanka’s ability to engage with friends and partners around the world.

We will follow Sri Lanka’s progress closely and look ahead to engaging with Sri Lanka between now and March 2019 in the spirit of friendship that has marked our recent relations. As Sri Lanka takes further steps outlined in the Geneva resolution, the United States will also support and expand our bilateral partnership.”

Eastern Province Governor Rohitha Bogollagma, who had been Sri Lanka’s wartime Foreign Minister, recently urged the Sirisena-Wickremesinghe government to unilaterally renounce the Geneva Resolution. Bogollagama asserted that there was absolutely no justification in expecting Sri Lanka to subject herself to Geneva Resolution in the wake of the very country that led the project quitting the UN body in disgust.

Asked whether he approved of the previous government’s attempt to influence the UK Government not to press Sri Lanka at the UNHRC through lawmaker Ian Paisley’s intervention, Bogollagama called it a wise engagement. Bogollagama said that Ian Paisley in particular coming from a Northern Irish political background and origin has quite a value to reflect on the separatist war that was waged in Sri Lanka as much as the IRA experience. “All countries do engage in such practices and this is part of diplomacy.”

Bogollagama pointed out how the LTTE sought the expertise of internationally known persons to target successive Sri Lankan governments.