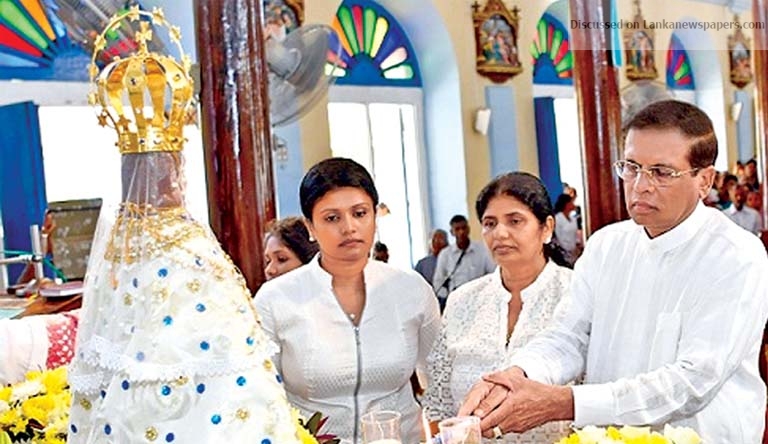 The Cabinet yesterday approved a proposal by President Maithripala Sirisena to declare the Holy Shrine of Our Lady of Madhu in Mannar as a sacred area.

The Shrine of Our Lady of Madhu is a much respected and venerated shrine to Catholics and for more than 400 years, Catholics and non-Catholics have visited the Holy Shrine to pay homage.

The Shrine also attracts Buddhists and Hindus devotees for veneration. Subject to ravages of the ethnic war dire need for constructive rehabilitation was becoming very evident due to immense hardship faced by the thousands of devotees making pilgrimage to the Shrine.

Madhu Shrine becomes the first Catholic Shrine to be declared a Sacred Area in the country.

For more than two decades, in the midst of the conflict and mass displacement, Madhu Shrine also served as a place of refuge for all affected people. Madhu Shrine has been recognised locally and internationally as a “safe haven” and “place of refuge” for people fleeing in the face of war and destruction.

The area where the Holy Shrine is located was in a state of neglect for some time due to the war.

The government plans to develop roads, transportation, water supply, sanitation, accommodation and other facilities in the area as proposed by President Sirisena.

This is a long overdue and most welcome measure for Catholics in the country as well as non-Catholics and foreigners who visit Madhu.

President Sirisena, after receiving blessings, discussed the development activities of this sacred church and area with Most Rev Emannuel Ferdinando, Mannar Bishop and the management clergy of the Madu Church and Archbishop Dr.Malcolm Cardinal Ranjith.

The President also exchanged views with the large gathering of devotees from different communities who were present at the Church and visited the surrounding area to inspect the existing facilities.