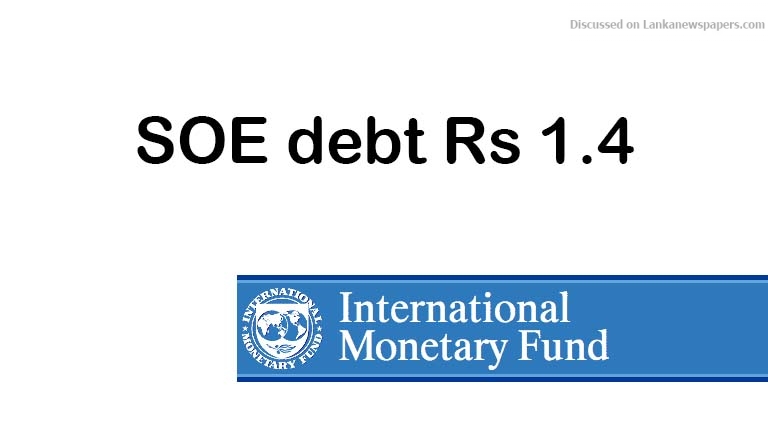 The outstanding debt of State-owned Enterprises (SOEs) last year stood at 10.8 per cent of the gross domestic product (GDP), the International Monetary Fund (IMF), in a recent publication, said. This is equivalent to Rs 1,435 billion.
The biggest chunk of this belonged to the Ceylon Petroleum Corporation – 2.9 per cent of the GDP, followed closely by the SriLankan Airlines – 2.8 per cent, the Ceylon Electricity Board (CEB) – 2.3 per cent and the Road Development Authority (RDA) – 1.2 per cent of the GDP. The outstanding debt of these four SOEs alone stood at 9.2 per cent of the GDP.
Sri Lanka has more than 200 SOEs, the IMF said. ‘‘The large and inefficient SOE sector continues to pose substantial fiscal risks,’’ the IMF said adding that SOEs financial obligations or debt consist mainly of project loans, short-term bank loans linked to fuel subsidies and aircraft lease commitments.

SOEs have engaged in quasi-fiscal operations such as supplying energy at subsidized prices and funding infrastructure projects, with their debt absorbed by the Government in times of difficulties, it said. The lack of transparency, including delays in publishing audited financial statements, has raised concerns over undisclosed liabilities. The authorities published Statements of Corporate Intent for five major SOEs last year vis-à-vis the CEB, the CPC, the National Water Supply and Drainage Board, the Airport and Aviation Services Limited and the Sri Lanka Ports Authority as a first step toward stronger governance and transparency, the IMF said.
Financial losses by the SLA averaged 0.1-0.4% of the GDP per year in 2011-17 and attempts to find a strategic partner have been unsuccessful so far, said the IMF adding that the overall, gross public debt is projected at 83.7 per cent of the GDP this year, lower than the 87 per cent of the GDP projected last year.
Meanwhile, financing needs of around 18.6 per cent of the GDP this year, coupled with international bond redemptions over a four year plan ,beginning from next year are going to place pressure on the country’s fiscal position, going forward, the IMF said.
Nonetheless, sustained fiscal efforts to reach an overall deficit of 3.5% of t he GDP by 2020 are expected to lower the debt ratio to 80% of the GDP by 2020 and, under unchanged policies, to 73% of the GDP by 2023, thereby reducing the risk of debt distress, the IMF said.
Meanwhile, doubling  next year’s primary balance target to 2% of the GDP from this year’s envisaged 1% of the GDP (Rs 145 billion), in the IMF’s view, should focus on domestic revenue mobilization, due to limited room for further expenditure cuts and the need to protect or raise social spending.
The IMF discussed  a menu of tax options for  next year’s Budget with the GoSL which included removing the remaining Value-Added-Tax (VAT) exemptions, expanding the labour income tax (Pay As You Earn tax), withholding and raising excise rates for fuel. ‘Efforts to strengthen tax compliance should also be stepped up to create space for para-tariff rationalization,’ the IMF said.