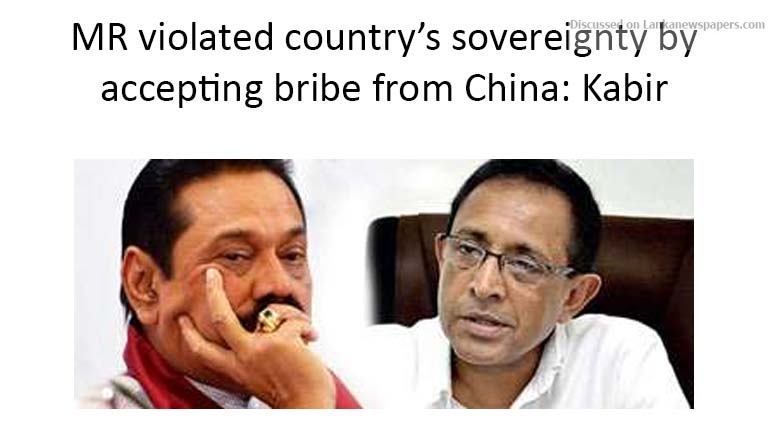 Minister of Highways Kabir Hashim yesterday charged that former President Mahinda Rajapaksa had not only accepted a bribe from China Harbour Engineering Company but violated the country’s sovereignty by getting into a framework agreement with the Chinese Company.

He said the former Sri Lankan government led by Mr. Rajapaksa had agreed to sell 50 hectares to China Harbour Engineering Company at the rate of just one dollar a hectare. He also charged that the framework agreement had clauses which denied Sri Lankan Navy the access to the Hambantota Port. “This agreement would have been implemented had Mr. Rajapksa won the 2015 presidential election,” Mr. Hashim said.

The Minister said Prime Minister Ranil Wickremesinghe was able to change the agreement and see to it that Sri Lankan Navy had access to the Hambantota Port.

Joint Opposition MP Wimal Weerawansa who responded to this allegation accused Prime Minister Wickremesinghe is out to violate Sri Lanka’s sovereignty by making plans to handover Mattala International Airport to India. Mr Weerawansa said Sri Lankan government had agreed to construct a 40-acre defence line around the Mattala Airport. He also charged that government is planning to close down the Southern command of the Sri Lankan Navy in Galle.

The MP also challenged that New York Times story by saying that the US State Department had accepted that America had spent funds for regime changes in several Asian countries such as Myanmar. The New York Times Story revealed that China Harbour had given funds to Former President Rajapaksa for his election campaign.

Meanwhile, Chief Opposition Whip and JVP leader Anura Kumara Dissanayake also charged that former president had not only messed up the country’s economic strategies but also had harmed political independence and the sovereignty of the country by obtaining commissions from the Chinese company.

“These development projects were connected with economic strategies. If the government had real economic strategies, it would have developed the Southern Jetty of the Colombo Port rather than constructing a loss-making harbour in Hambantota. Instead, we gave Colombo Jetty to China and built a port in a secluded area. There were hidden agendas behind such moves,” he said.