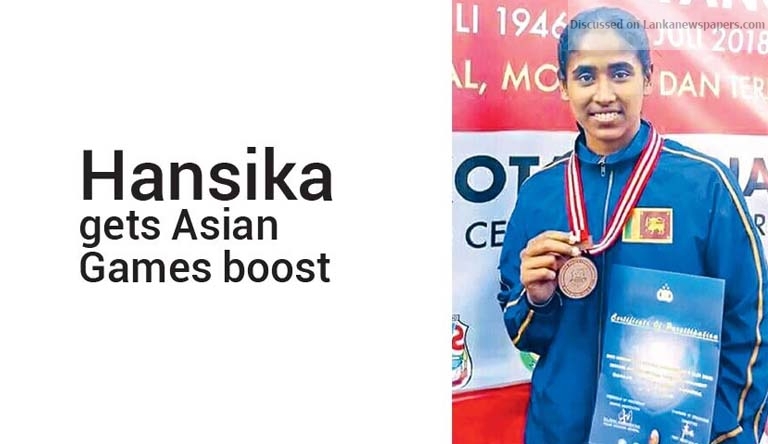 Sri Lanka’s boxing ambitions at next month’s Asian Games, received another shot in the arm, with Keshani Hansika winning a bronze medal in the lightweight class at the Indonesian Police Commissioner’s Cup (Kapolri Cup) International Open in Manado last week.
Hansika (27) knocked out home favourite Stella Maama in the 57kg category in her opening bout to reach the semi-finals ensuring Sri Lanka of a bronze medal. She then faced, the tough Vietnamese VuongThiVy in an attempt to gain the gold medal, suffered heartbreak as she lost narrowly on a split decision.
“It was disappointing to lose so narrowly. I felt I had done enough to win but unfortunately that was not the case. Yet, I’m very happy with my performance as this will be a huge boost as I look forward to the Asian Games,” Hansika said soon after returning home over the weekend.
More than 150 boxers, the cream of Asia, took part in this final competition before the Asian Games gets underway in Jakarta and Palembang from 18 August to 2 September.
Hansika’s performance capped off a good tour for the Sri Lankan women’s contingent who have been on the road for the last one month preparing for the Asian Games. A fortnight ago, the local queen of the ring, Anusha Kodithuwakku, also won a bronze medal at the Ulaanbataar Cup in Mongolia.
Kodithuwakku could not replicate her form in Indonesia losing to Japanese opponent  Aya Shinmoto who used her longer reach to ward off a feisty challenge from the Sri Lankan in the 51kg category. Kodithuwakku had defeated Indonesia’s Yudit Maunino in her opening bout – the referee stopping the fight 90 seconds into the first round after Kodithuwakku had peppered her opponent with some ferocious punches.
The third local girl in the team – Krishimi Dharmathilake lost her opening bout in the 61kg lightweight class to Thailand’s Sudaporn Seesorndee. All three girls work for boxing’s corporate backer MAS, a longstanding supporter of the sport.
“We are all very grateful for the support we get from our employers,” said Hansika, who is an HR executive at MAS Unichela. “They back us all the way, and all these competitions we have been taking part in as we prepare for the Asian Games, would not be possible without their funding and support.
“Getting international exposure is very important for a boxer. I know what to expect at the Asian Games. It will be tough as we will come up against opponents from China, Korea, India and the Philippines. But, my confidence is high after winning this medal,” added Hansika. It is her second triumph on the international scene having won a silver medal at a boxing meet in the Netherlands last year.
“I began boxing while I was at school at Ananda Balika Vidyalaya in Kotte. My first love was cricket and I played for the women’s team at the Colts Cricket Club. But, since joining MAS, I have been only focusing on boxing. My hope is to take part in the World Championships in New Delhi in November and then further ahead at the 2020 Olympics in Tokyo,” revealed Hansika.